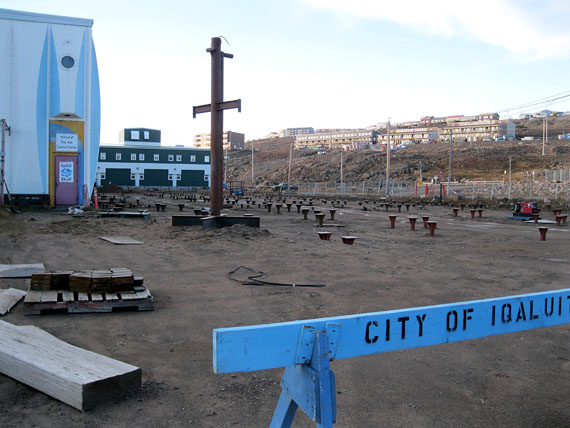 Iqaluit’s aquatic centre will start to take shape on this lot behind the Arnaitok complex in the summer of 2015, when Kudlik Construction starts building on top of 305 piles that are already in place. (FILE PHOTO)

Iqaluit hit its budget — almost exactly — for construction of the city’s aquatic centre.

City council approved the contract to Kudlik Construction, Nov. 25, almost a full month after the Iqaluit-based company hit a target of $30.16 million — beating out four other bidders to put up the three-storey-high facility next to the Arnaitok Complex.

Project managers say the bid comes in at $100,000 over budget. They believe they can recover the sum through cost savings on interior installations.

The centre’s total “forecast cost at completion” is expected to be $40,680,508, according to project managers.

$34 million of these costs, including construction, will be funded from loans from the Bank of Montreal and the Federation of Canadian Municipalities.

Council passed a motion to grant the construction contract to Kudlik, five votes to one.

Coun. Kenny Bell stayed true to his promise of consistently voting against the project, on the argument that it is taking funds away from more urgent priorities.

Pierre Meredith, senior project manager for MHPM Project Managers Inc., which is overseeing the project for the city, told council that “negotiations for project financing are ongoing, and expected to be completed shortly.”

Elgersma replied that the FCM loan is tied up, and the Bank of Montreal loan “should be signed off and completed shortly,” once lawyers complete an “intense review of the documents.”

She underlined that Kudlik Construction’s contract will only proceed once financing from the bank is finalized.

The contractor’s bid is valid until Dec. 27. Elgersma said project managers expect the project will be ready to proceed to the construction phase well before that time.

Iqaluit-based Canadrill Ltd. installed 305 piles for the centre’s foundation this fall, at a cost of $1.2 million. Kudlik Construction will start the second phase of construction — installation of the entire building — by the fall of 2015.

Construction will be continue in 2016, and be completed by the end of that year, according to MHPM’s project timeline.

The aquatic centre will house two pools with water slides, a fitness centre and related facilities on two floors.

The REACH fundraising campaign, which Elgersma co-chairs, will cover up to $3 million in project costs.

City reserve funds devoted to the project and savings from Iqaluit’s old pool, which shut down in 2012, will pay off most of the $34 million loan, according to city administration.