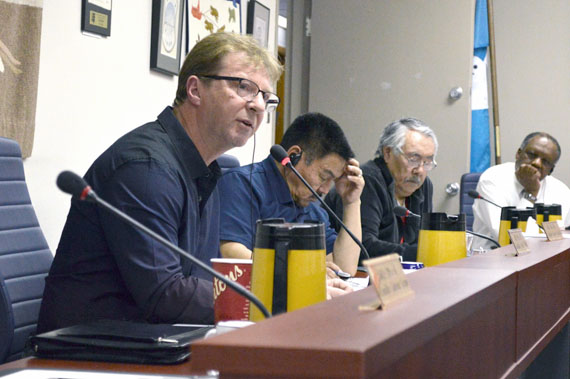 The City of Iqaluit’s infamous waterless Wednesdays policy, which affects many households and businesses on trucked water service, is suspended, following a motion passed April 26 by Iqaluit City Council.

Council demanded that city administrators provide them with information proving the policy is indeed saving money, and justify the inconvenience posed to trucked service users struggling to keep water tanks full during the week.

Coun. Terry Dobbin, who made the motion to suspend the waterless Wednesdays policy, said the city’s chief administrative officer, Muhamud Hassan, never properly briefed councilors, or Iqaluit residents, about his decision to cut back on water delivery service.

The CAO implemented the policy last year as part of an effort to reduce Iqaluit’s estimated $8.5 million deficit.

Under that policy, trucked water households must pay a $250 fee for emergency fill-ups on the excluded day.

Dobbin read councillors a past statement by Hassan — who is currently on vacation — defending the city’s implementation of waterless Wednesdays.

“Proper protocol and procedures have been followed. It is not typical that the public should be consulted on such a routine operational budget decision,” Dobbin said, quoting Hassan.

But Dobbin said the public should indeed have been consulted.

“If we look at it as a fundamental right. How do we justify it? If somebody has water six days a week… and they have to pay $250 dollars more so they can have their water [week long]… We are treating the citizens in a different way.”

Coun. Joanasie Akumalik, who added the issue to the council’s agenda, said he had been unsuccessful in efforts to introduce the topic in previous weeks.

“I was unsuccessful because I was told we have to wait for information from the audited statements… in May,” Akumalik said.

Coun. Gideonie Joamie reminded councillors that the CAO originally promised that financial information would be available to council in January.

“I seem to recall around our orientation that we would have that information in January, and that came from our CAO. It wasn’t subject to our finances being audited,” Joamie said, adding that he wants city administration to release financial figures by the next council meeting.

Dobbin demanded the CAO provide concrete evidence that the city is saving money.

“If the CAO is saying he’s saving a million dollars a year with waterless Wednesdays, he was supposed to provide quarterly financial statements… I can’t see why he can’t provide the reasons for the savings,” he said.

“If people are going to have undue hardship, a blizzard a couple times a week and uncertainty. Show us the numbers.”

Stevenson is filling in for Mayor Madeline Redfern, who is currently away from the city on vacation.

When asked by Nunatsiaq News if the absence of both the mayor and CAO had anything to do with the inclusion of waterless Wednesdays as a discussion topic, Dobbin said it was only a matter of timing.

“I think it would have happened eventually anyhow,” he said.

“It was tried previously to be put on the agenda, and the mayor said that the CAO was coming back in May and he was going to provide the numbers… Until we start seeing the numbers, until the CAO starts proving where the dollars are actually being saved, I just want to put everything on hold.”

Iqaluit City Council is next scheduled to meet May 10.