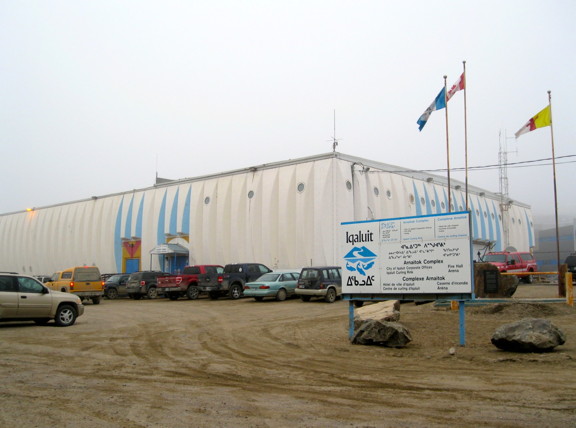 The City of Iqaluit has no blueprints for the Arnaitok Complex, which complicates proposals for renovations and other major changes to the structure. The building houses City Hall, the fire hall and an arena. (PHOTO BY PETER VARGA) 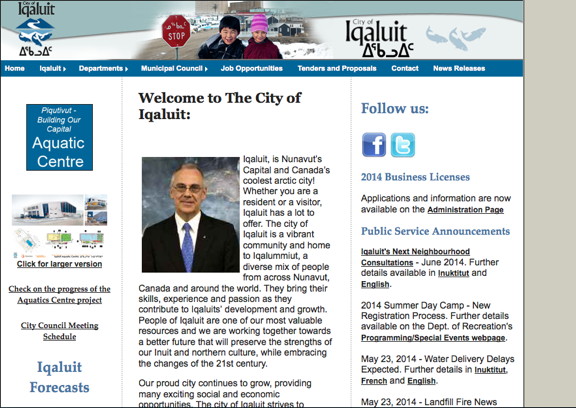 A proposal to replace the City of Iqaluit’s website, pictured, with a multi-functional new one costing up to $100,000 sparked debate in city council. (SCREENSHOT)

City councillors’ wish to improve access to Iqaluit City Hall seemed more complicated than they thought, May 27, when two projects on the agenda ran into cost concerns.

The first to run into snags was a plan to install a stair-lift or elevator for residents with disabilities. But planners said they could not find blueprints for the Arnaitok Complex, where city hall is located.

Plans for the decades-old building could not be found at city hall, nor from the company that built the structure.

“Basically, in order for us to move forward, we need to get a feasibility study done,” said Mohammad Hussain, materials management coordinator for the city.

Without blueprints, “we don’t know what’s behind the walls,” he said, pointing to electrical wiring, and the integrity of the building’s structure.

“One thing we’re looking at is possibly running into asbestos in the walls,” he added. Washrooms may also need renovation on every floor.

Weak or limited structural integrity could also mean builders might have to construct a lift outside of the building.

One possible solution would be to simply link the building with the new aquatic centre being built next to Arnaitok, he said.

Coun. Kenny Bell noted that the city had budgeted $140,000 in 2013 for a stair-lift at a back door of the building, and questioned why an elevator was considered instead.

The city’s fire chief warned that the Arnaitok Complex’s electrical grid is already used to capacity, Hussain said, which would make it impossible to install any new system that draws power.

Councillors Simon Nattaq and Noah Papatsie questioned whether it was worth it, or even feasible to make any major changes to the building’s structure.

“Last I heard, the building was not suitable to build in anything more. So we’re probably breaking the law right now,” Papatsie laughed.

“I used to dance around this arena when I has a kid, so, boy, this building’s really old,” added Papatsie, who is in his mid-40s.

Council agreed to allow Hussain to follow through with a feasibility study.

A project to create a new and improved City of Iqaluit website, geared to improve access to city services, tenders and proposals, news and city information, provoked more questions about costs.

The city’s director of corporate services, John Mabberi-Mudonyi, asked council to consider adding an expense of $20,000 to the $80,000 website, proposed by Outcrop Nunavut.

Councillors Kenny Bell and Terry Dobbin immediately balked, and questioned whether the original $80,000 was worth it.

Mabberi-Mudonyi explained that the $20,000 would add “functionality” to the site, specifically when the city has to alter requests for proposals and tenders. Added features could altogether eliminate the need to advertise outside of the city’s website, he said.

“When we have changes, we go to the press to have them published — it costs us about $4,000 to do that in the city of Iqaluit,” Mabberi-Mudonyi said. “If we make 10 changes a year or whatever, how much does that cost? You do the math.”

Other councillors pointed out that members had already considered and agreed to the $80,000 project.

Mabberi-Mudonyi noted that Outcrop Nunavut had agreed to demonstrate the website to council in June. Council agreed to see the demonstration before making a decision to adopt it.