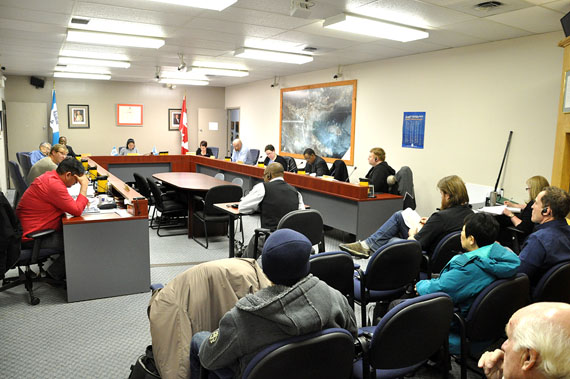 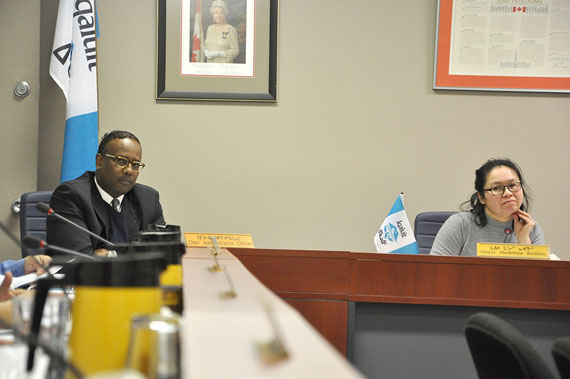 In their second meeting since being sworn into office, Iqaluit city councillors continued their efforts to fix the city’s sinking finances by pushing a flurry of bylaws through first and second reading Nov. 24.

Muhamud Hassan, Iqaluit’s chief administrative officer and a main architect of those bylaws, summed up the city’s current financial state as bleak.

“If we went to any financial institution right now, they would just look at us and laugh,” Hassan said.

The city wouldn’t be able to borrow any money because of continuing deficits in its operations and in various funds, as well as the long-term financial obligations they carry, Hassan said.

After about two hours, council put six bylaws through their first two readings. Five of those bylaws deal directly with cleaning up the city’s finances.

The bylaw that council spent the longest time asking about is simply called, “Debt Management Bylaw.”

This bylaw provides a framework for city staff to analyze the city’s current debt position before council can move ahead with future projects, Hassan explained.

Previous councils and administrators would approve projects without properly analyzing their existing debt, he said.

Under the territorial Cities, Towns and Villages Act, communities are already forbidden from carrying a deficit from one year to the next, Mabberi-Mudonyi explained.

“Deficits are a result of expenses exceeding revenue. Debt is a financial obligation exceeding financial assets,” he said to help councillors confused between the two terms.

Right now, the city’s financial position is that total liabilities are about $8.2 million more than total assets.

The city plans to tackle both its deficit and debt, in large part, by funding projects internally from money received from either the territorial or federal government, Mabberi-Mudonyi said.

Instead, the city’s usual practice in the past has been to use high-interest loans from small financial institutions, Hassan added.

The city’s financial year runs from Jan. 1 to Dec. 31 — so the final financial position for 2015 won’t be known until after the year ends.

But so far this year, the city’s third-quarter financial statements, obtained by Nunatsiaq News, for 2015 show an improvement in their general operating fund, which is running $4.4 million in the black.

However, the total of all deficits listed in the city’s various funds — for categories such as sanitation, water and sewer, land and development — come to about $9.9 million, the third-quarter statement shows.

The city also borrowed $6.09 million to pay for construction work on the aquatic centre, likely drawn from a $29 million credit facility negotiated earlier with the Bank of Montreal.

All of the bylaws discussed Nov. 24 aimed to prepare the city for taking on the full debt created by the aquatic centre upon its completion in 2016, city staff said.

The next three bylaws discussed by councillors followed the same theme:

• the Iqaluit Annual Budget Bylaw, which reiterates a requirement under the CTV Act for municipalities to keep a balanced budget; and,

• the Multi-year Budgeting Bylaw, which requires councillors to think of the longer-term financial wellbeing of the city.

Looking further down the road than administration and council has historically done means better management of projects in the future, Hussan said.

“It’s another tool that helps us aspire to be a major player in the territory,” he said of the multi-year budgeting bylaw.

Council also passed the first and second readings of a bylaw to appoint an auditor to review the city’s finances, as required under the CTV Act.

All of the bylaws that received second reading Nov. 24 still must pass a third and final reading before coming into effect.

Council will likely try to get those readings in before the end of the year, at their Dec. 8 or Dec. 22 meeting.