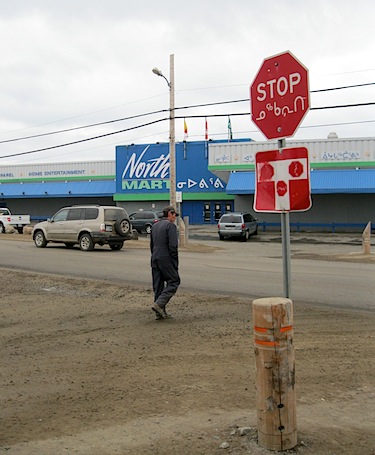 Following an accident that took a four-year-old boy’s life near a busy intersection in Iqaluit July 29, city councillor Joanasie Akumalik proposed Aug. 13 that the city paint crosswalks for pedestrians at Iqaluit’s busiest intersections, such as this one in front of Northmart. (PHOTO BY PETER VARGA) 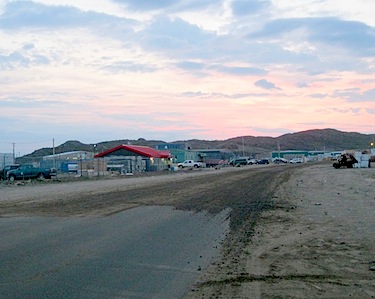 Federal Road will be the city’s avenue to the refurbished Iqaluit Airport. Traffic will access the new terminal from this stretch, where asphalt ends just north of Federal garage. The city hopes to repave the road before the terminal opens in 2017, with a little help from the territorial government as it works on its $300 million project. (PHOTO BY PETER VARGA)

Coun. Joanasie Akumalik brought attention to the tragic death of a four-year-old boy at one of Iqaluit’s busiest roads in front of the 190s-block of houses July 29, and called for painted crosswalks and other visible markers on busy pedestrian crossings and intersections to prevent further such accidents from happening.

“I was very shocked about it,” the councillor said of the incident, which took place on an early Monday morning under sunny skies. “I think the whole community was kind of shocked. It was a beautiful summer morning and it’s unfortunate it had to happen that way.”

Akumalik suggested the city mark up the asphalt with warning indicators to make drivers slow down and pay greater attention to pedestrians, starting with the area around the July 29 accident.

“Children do play there all year long,” he said, pointing to the roadsides between Arctic Ventures and Nakasuk School, which include a park with footpaths on one side, and open areas of playing fields and wide setbacks from the road on the other.

A pedestrian road crossing between the Tammaativvik Boarding Home and Qikiqtani General Hospital should also be marked, Akumalik said.

“That area needs to be painted so patients and residents can cross properly without having to be threatened by fast-moving vehicles,” he said. Clear indications are particularly important for residents from smaller communities, he added, as they are not as familiar with traffic signs.

The councillor pointed to the need for marked crossings in other areas of high pedestrian traffic, such as the arena, airport, and major stores.

On a brighter note, Akumalik praised the two summer students the city hired to pick up persistent garbage around city roads and streams.

Hired at the end of June by Iqaluit public works thanks to a $30,000 grant to the city from Northern stores, the students have removed trash from public property around the city this summer.

“I always see them when I get out at 8:00 in the morning,” Akumalik said, adding that the two workers said they could improve on their work if they had tools suited for the job.

“I think they deserve a big pat on the back, and as Joanasie said, let’s get them the equipment they want to get the job done,” Morrissey said.

The councillor also hopes to get the city to tap into some resources from the territorial government — in the form of asphalt and equipment needed to repave the crumbling Federal Road.

That roadway will replace Mivvik Street as the city’s new access route to the airport once a new terminal is built as part of the territorial government’s $300 million Iqaluit airport improvement project.

Improvements to access roads just outside the airport grounds — such as Federal Road — are not part of the plan, and it falls on the city to improve these in the shadow of the massive project.

With that, Morrissey tabled a motion to explore whether the city could benefit from some of the government’s resources used to improve the airport — the greatest portion of which will go into paving the entire runway and tarmac.

“There’s literally millions of square feet of paving that will have to be put down at Iqaluit Airport,” mayor John Graham commented.

The city’s intent, he said, is that “while that work is taking place, we take advantage of economies of scale over the next three to four years while work is being done, and get whatever paving upgrades that we require on our roads.”