Outgoing Iqaluit councillor spares no one with his parting shots

“Everyone knows the way the city runs sucks” 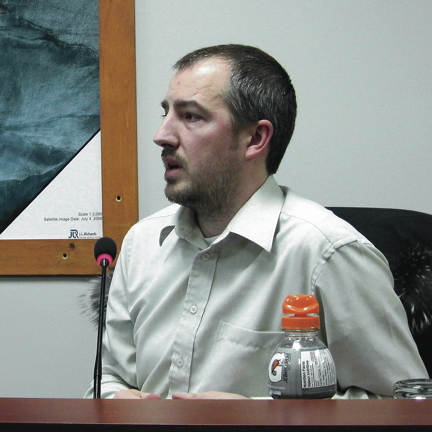 Iqaluit councillor Kenny Bell says much at city hall needs to be fixed by the next slate of councillors who will be elected Oct. 19. (FILE PHOTO)

Just before outspoken Iqaluit councillor Kenny Bell abandons ship prior to the Oct. 19 municipal election, he couldn’t help slinging a few arrows at the mayor and fellow councillors.

“Everyone knows the way the city runs sucks. But if we just keep hiding things, which has been the current practice, we’re never going to succeed,” Bell told Nunatsiaq News Oct. 14.

Bell was summarizing a statement he made publicly to council Oct. 13.

Bell has made no secret of his disdain for the quality of Iqaluit’s municipal governance — and some of the people who govern — during his three-year tenure as city councillor.

He and Mayor Mary Wilman have locked horns at recent council meetings about, among other things, councillors’ conduct.

And Bell has also criticized the mayor for a lack of transparency and openness.

For example, Bell said he was one of three councillors who asked the mayor to hold a vote at the Oct. 13 meeting on whether the final scheduled council meeting on Oct. 27 should be cancelled.

“But that wasn’t added to the agenda, for whatever reason. Either way, I’m not attending that meeting, if there is one.”

Councillors asked for the vote, Bell said, because by Oct. 27, Iqalungmiut will have chosen the next set of councillors and mayor to lead the city for a new three-year term.

And since what current councillors can do during that last meeting is so restricted, it’s hardly worth holding a meeting, Bell said.

The municipal election will be held on the same day as the federal election: Oct. 19.

Bell said during his term on council, the city has constantly found itself in crisis mode, dealing with every issue on an emergency basis.

“That means we’ve had, like, no time to develop policies,” he said.

And councillors, instead of doing their own homework, have relied too heavily on the city’s administrative staff, Bell said.

“We have a good staff… but when they leave we’re not better off because we don’t take their expertise and run with it. We’re starting over again with every new employee.”

Many councillors don’t even bother to read their binders of documents that contain information and background on issues that councillors vote on, Bell said.

To make matters worse, Bell said he was told not to pose questions to the staff on city issues.

“For lots of votes, there’s no way they were really informed.”

For example, many decisions involving employment and contracts are made in-camera, Bell said, but it’s up to councillors to decide if a decision should be made in-camera in the first place.

However, staff routinely provide councillors with information about in-camera items just before heading into the in-camera session.

“So how can we know if those things need to be decided in-camera?”

Even the council-approved policy of providing councillors with information 48 hours ahead of a meeting isn’t sufficient to pore over the documents, he said.

Bell will not run for city council again, but said he has thrown his support “absolutely” behind mayoral candidate, and former Iqaluit mayor, Madeleine Redfern.

“I have full faith that Madeleine is going to be open and transparent with the public, like she was in her last term.”

Current councillor Noah Papatsie is also running for mayor as the third candidate.