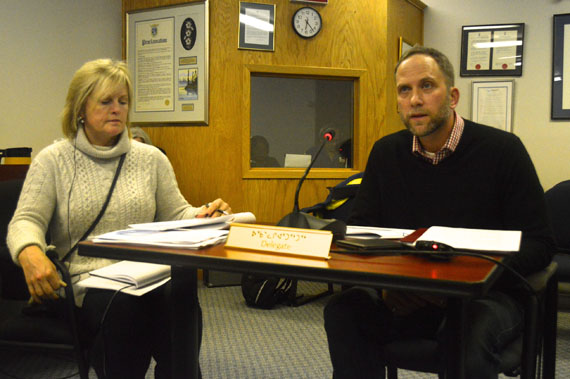 Work on Iqaluit’s future deep sea port is progressing steadily towards a completion date in 2020, representatives from Nunavut’s department of Community and Government Services told Iqaluit city councillors Sept. 27 in a project update.

But many details on the deep sea port’s potential impact on local infrastructure remain unclear.

City councillors used their time with Mulak to press for more details and add suggestions.

Citing the growing fishing industry in the territory, Coun. Terry Dobbin asked Mulak if CGS has any plans to construct a processing plant for fish or a warehouse for shipped goods.

Mulak responded that, as of now, no plans by the government for either type of project are in development.

“[The Department of] Economic Development and Transportation certainly has strategies around developing the fisheries sector. How that dovetails with this project I can’t speak to,” he said.

Mulak added that the current plan is to have a large lay-down area near the deep-sea port, which is currently being designed to accommodate one vessel at a time.

As for management of the port, Mulak said the Government of Nunavut is still exploring options.

Those include either establishing a local Iqaluit harbor authority or a pan-Nunavut association responsible for management of several ports within the territory, such as the small craft harbour in Pond Inlet.

The GN could also operate the facility, Mulak said.

Mulak said his team will spend the remainder of 2016 producing conceptual “predesigns” for the port, located past Iqaluit’s causeway, as well as a retrofitted small craft harbour, which will be expanded from the city’s existing breakwater.

According to early designs, Iqaluit’s current breakwater will be extended further out into Koojesse Inlet, allowing for boats to moor during low and high tides.

Deputy mayor Romeyn Stevenson told Mulak that CGS should commit to separate community consultations on both the deep-sea port and the small craft harbor.

“I fear the small craft harbour will get overshadowed,” Stevenson said, while also stating the city should commit to cleaning up its access road to the city’s dump, towards the new port, before the 2020 completion.

Mayor Madeleine Redfern agreed with Stevenson, noting that the city expects to move into a new landfill site in the coming years and should dedicate itself to restoring the port’s access road—which runs through the city’s current dump and temporary landfills—for the sake of potential tourists.

Salt-laden soil, brought up during the dredging of the port, could be used to prepare the landfill, Redfern suggested.

Mulak responded that the GN currently doesn’t have any plans to improve the causeway or access roads, but that may change as the project advances.

No firm dates have been set for the public consultations.

According to a rough timeline given to councillors by Mulak, the design and permit application for the deep-sea port will continue until the end of 2017.

Mulak said his team hopes to award the construction contract by February or March of 2018, with an expected two-year completion time for the deep-sea port from that date.