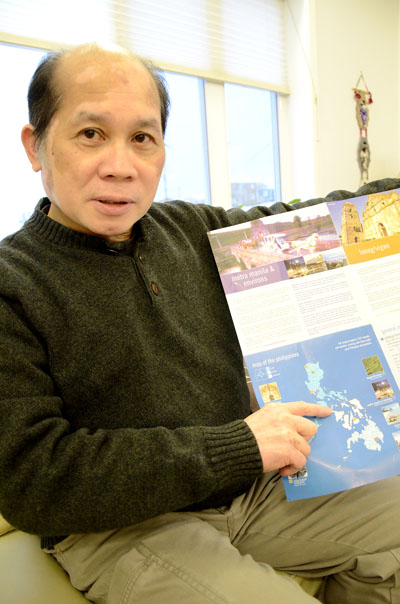 Bob Gabuna of Iqaluit points to the island province of Romblon in the Philippines, where his family are located. The Philippines were hit with a massive typhoon this past week, killing almost 2,000 people, but many more are feared dead. (PHOTO BY DAVID MURPHY)

When a massive typhoon washed through the islands and cities of the central Philippines, Bob Gabuna, sitting on the opposite side of the world in a house overlooking frozen tundra in the Plateau subdivision of Iqaluit, sat with his eyes glued to the television.

His family resides in Romblon, an island province in central Philippines known for its white, sandy beaches, and which Typhoon Haiyan ripped through this past week.

“They are hungry and feeling cold, but they are alive. And that’s what counts,” Gabuna said.

Gabuna isn’t the only Filipino in Nunavut feeling the effects of Typhoon Haiyan, whose winds peaked at 315 kilometres per hour, and which is being described as one of the worst tropical storms on record.

He reckons that about 25 Filipino families living in Iqaluit are also anxiously watching images of the Category 5 storm and its aftermath on television and the Internet.

Iqaluit resident Esmeralda Bautista grew up in Tacloban: population 212,000. The city, on the east coast of the Philippines, was one of the worst hit.

Thankfully, none of her family members were killed. The official death toll sits as 1,774 as of Nov. 12.

The long wait for news from family members may be the worst part of the experience, Bautista said.

“My sister and I stopped looking at Facebook for fear that the next dead person that will be shown will be a relative. And so [if] it’s traumatic for us, and we’re away from it, how much more would it be for people that are already there?”

In response to the disaster, members of the Filipino community in Iqaluit, along with others in town, are pitching in.

Last Sunday Nov. 10., the Our Lady of the Assumption Roman Catholic parish in Iqaluit raised $750 that will go towards the relief efforts of the International Red Cross.

Perreault said those who wish to donate may go to the church — building 911 — and put money into a envelope clearly labeled to the Red Cross for the Philippines disaster relief.

Across the street at the Royal Bank of Canada branch in Iqaluit, manager Catherine Lightfoot said anyone who wants to donate to the Red Cross can do so at the RBC too, and a tax receipt can also be mailed home at a later date.

Christian Paradis, the minister responsible for the Canadian International Development Agency, told reporters Nov. 10 that the federal government will match every dollar donated to a registered Canadian charity.

Gabuna sent out an email to the Iqaluit-Filipino community Nov. 10 challenging them to take advantage of the government’s pledge.

He said the group is still in discussions on how to raise money and which charity the money should go to.

“Are we going to mobilize ourselves as Filipino-Canadian-Nunavummiut and raise funds and avail the offer of the CIDA minister Paradis?” Gabuna sent in an email to 44 addresses.

Gabuna and his wife have already sent thousands of dollars directly to their family members.

Bautista will eventually send money directly to family as well. She, however, has to wait a little longer.

“In Tocloban there’s no way to send money. Banks are down, communication is down,” Bautista said.

She’s waiting for her family to retreat to another relative’s home in the Manila, capital city of the Phillippines.

And although she still has to wait a few more days to do that, she takes comfort in the fact that support from around the world is pouring in.

“People in the Philippines will know that a lot of people are thinking about them, and trying to get help through to them and praying for them,” she said.

“It’s very heartening knowing we have a lot of outside support.”

But as a member of the Iqaluit public safety committee, Gabuna questions the way the evacuation was handled.

“I have some training, too, on emergency preparedness. The warning that was given to the place that was destroyed the most was not properly conveyed,” he said.

“To them a storm is a common occurrence. It’s nothing.”

However, Gabuna has the ability to ease a room with uproarious laughter even in times of discomfort.

“In fact one of my relatives, when they raised it to Category 4, he went fishing,” Gabuna said with a booming laugh, “because he didn’t understand what this meant.”

Gabuna said people want to help can email him at bob.gabuna@northwestel.net if they want more information about donating.