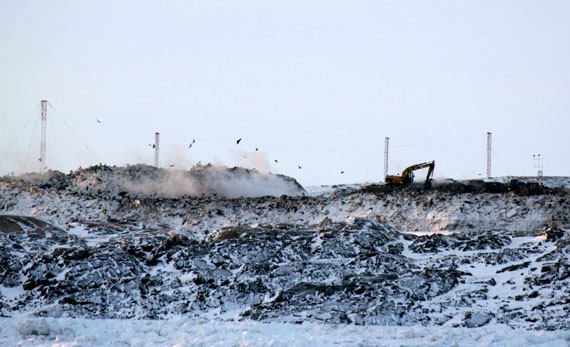 Iqaluit’s fire department have isolated “hot spots” at the the city’s landfill pile Dec. 12, after they extinguished a surface fire of 40 square metres during the early morning hours. (PHOTO BY PETER VARGA)

Iqaluit’s fire department doused a fire at Iqaluit’s waste landfill in the early morning hours of Dec. 12, after receiving a call at around 2:00 a.m.

The flare-up covered almost 40 square metres on the dump’s surface, according to mayor John Graham.

“The flames were actually coming out the side of the landfill pile,” said Graham. “By the time I got there just after 4 a.m., the situation was under control.”

Fire chief Luc Grandmaison and his crew used thermal imaging cameras to monitor hot spots around the area where flames had come to the surface, Graham said.

Fire engines left the scene at 7:15 a.m., he said, after flames were extinguished.

“It’s being monitored constantly,” Graham said later in the morning. “A lot of what you see out there right now is actually steam.”

City crews were cutting a trench across the landfill to isolate hot spots.

“In the event of another flare-up, which is quite possible, we’re containing it to one area,” he said, noting that a minor fire had also occurred at the dump a day earlier, Dec. 11, at about 11:15 a.m.

“We’re keeping a close eye on the situation,” he said.

The city closed the dump to public access for the day.

The city hopes to establish a new waste site to replace the West 40 landfill by 2015, at the earliest. City council has called for an incinerator to be included in plans for a new waste site northwest of the city.

A large fire within the landfill pile in the fall of 2011 took one month to extinguish.

The Dec. 12 flare-up is not considered suspicious, the mayor said. As in past fires, the city believes the blaze was caused by high-temperature decomposition of waste and the mixing of volatile chemicals.