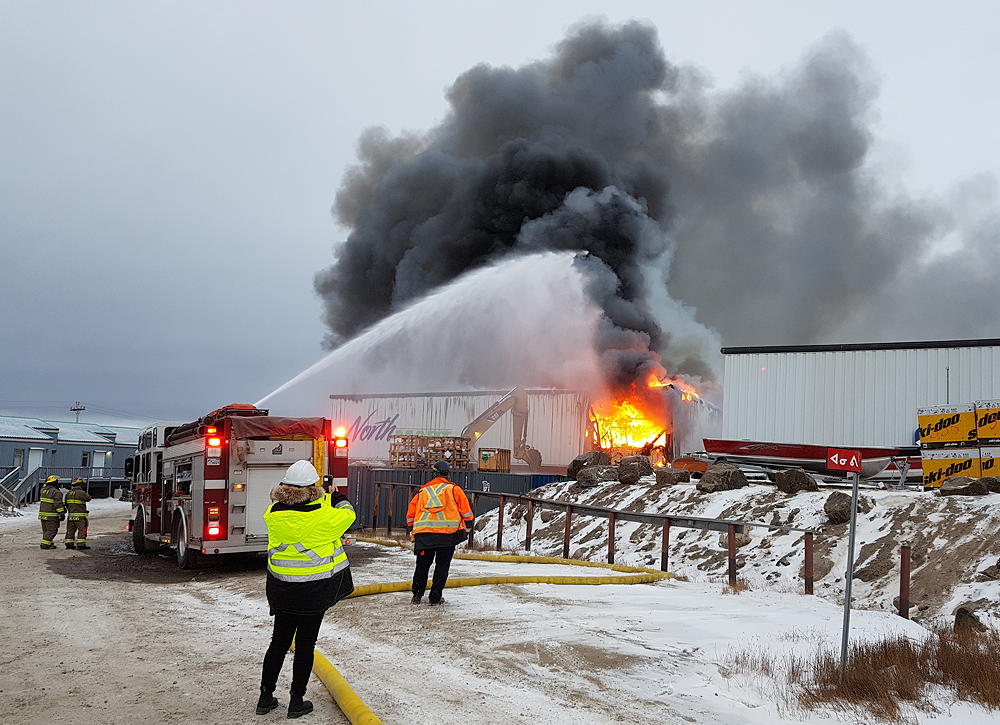 Iqaluit firefighters battle a fire inside the Northmart building on the morning of Thursday, Nov. 8. Here you can see heavy equipment being used to break open the building to help expose the fire. (PHOTO BY SARAH ROGERS) 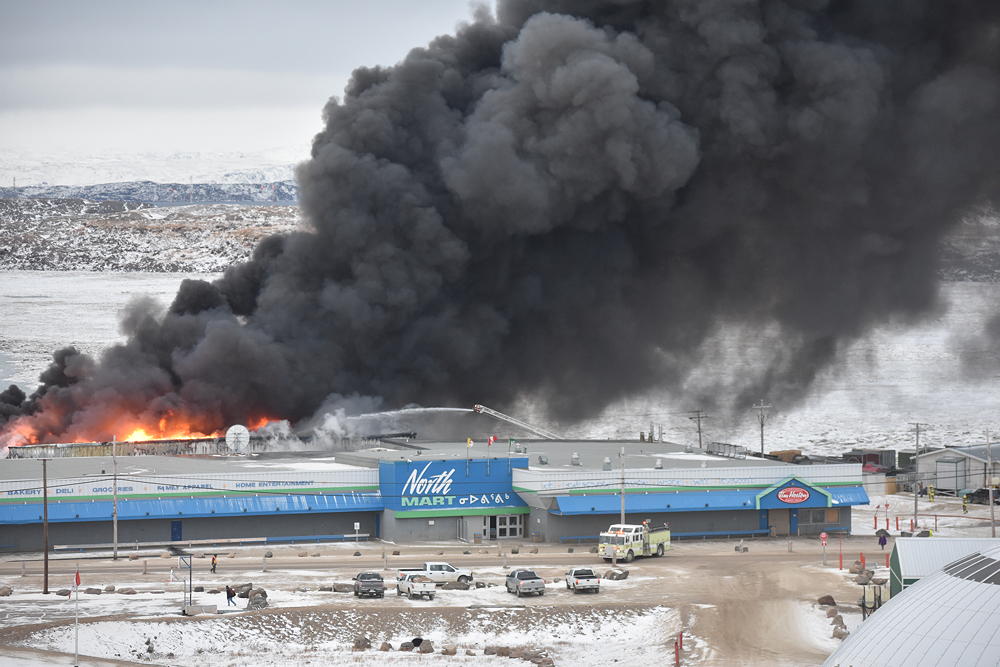 This morning Iqaluit firefighters continue efforts to extinguish a fire at the Northmart store in Iqaluit.

The fire, which started early Thursday morning, led to the evacuation of elders living in a row of elders’ apartments located directly behind the store.

The fire started in the storage building located behind the actual grocery store. By about 8 a.m., as the fire intensified, firefighters were using heavy machinery to open the building and expose the fire.

The impact on the retail store remains unclear this morning. Firefighters said they did not know if there were any staff or people in the building when the blaze started.

A pharmacy, a Tim Hortons outlet and a bakery are also inside the store, located near the beach in the centre of town across the road from Nakasuk School.

“This is terrible,” said one bystander who didn’t give her name. “Where are we going to buy groceries?”

“It’s bad,” said another woman. “All that sealift is up in flames for sure. I just see food insecurity even more.”

A number of elders living in housing units just behind the store were evacuated at 3 a.m. and moved into the nearby Qammaq building. No one in that group was injured.

Iqaluit Mayor Madeleine Redfern urged residents to not panic about the city’s food supply. City and Government of Nunavut officials have met with retailers, and “all our other retailers are confident that they have sufficient food on hand to supply our community needs,” she wrote on Twitter.

“Majority of our daily food is brought in by plane and will continue to do so. The situation is being monitored and assessed.

“At this point in time, there is no need for our residents to panic. If the shelves become empty, they will be replenished in due course.”

Nakasuk school and other office buildings along Queen Elizabeth Way in Iqaluit were closed Thursday morning.

The City of Iqaluit is asking residents on trucked water to conserve water for the day, so water trucks could supply what was needed to the fire department.

The city is also asking residents to keep clear of the roads in the area around Northmart.

There were reports of other smaller fires around the city late Wednesday night and early Thursday, though it’s unclear if they’re connected to the Northmart blaze.

My mother lost power at the Elder’s Units, which alerted her to the fire. She is now safely tucked into bed at my place.

The shop is in full flames.

With files from Sarah Rogers and Jane George