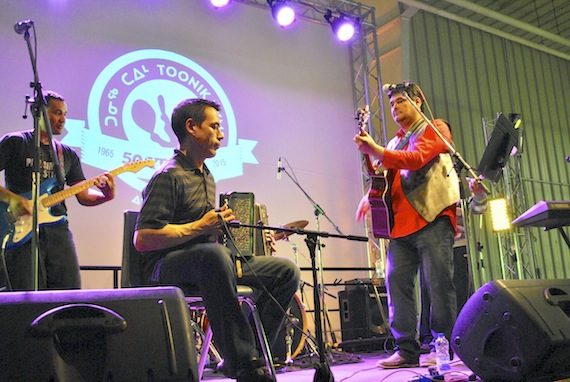 Gideonie Joamie, right, and Stephen Innuksuk, seated, of the band Kamaalukutaat perform at the Toonik Tyme festival’s closing feast, April 9. The band played free of charge, for the benefit of the family of deceased hunter Sandy Oolayou who perished in a snowmobile accident during the festival’s seal-hunting contest. (PHOTO BY PETER VARGA) 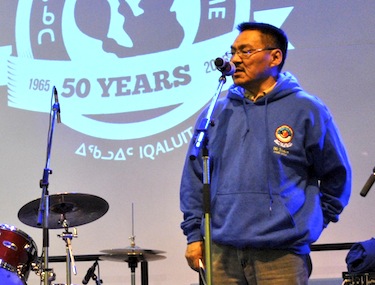 Joanasie Akumalik, master of ceremonies for Toonik Tyme’s closing feast, April 9, announced that proceeds from a fundraising raffle for the festival’s Kimmirut snowmobile race would go to the family of Sandy Oolayou. (PHOTO BY PETER VARGA) 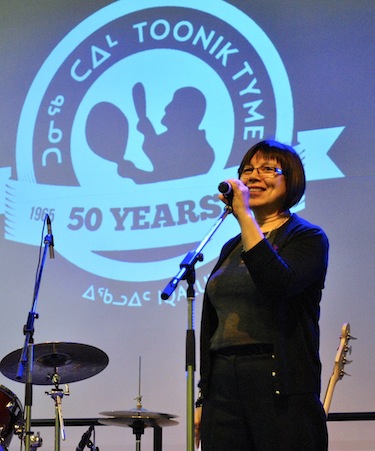 The Toonik Tyme spring festival’s closing community feast is usually a time to celebrate the conclusion of a successful week of events.

Organizers did just that on April 9 despite the loss of Sandy Oolayou — known to most Iqalungmiut as a prolific hunter who always shared his catch — to a snowmobile accident, April 6, during the festival’s seal hunting contest.

“In the middle of these events and activities, everyone is also grieving Sandy Oolayou’s accidental death,” Iqaluit mayor Mary Wilman said on behalf of the city to an audience of festival-goers of all ages at the curling rink.

More than 350 attended the evening of music, country food and a fashion show that showcased sealskin garments.

“Our hearts and our love goes out to his family, and his wife,” Wilman said.

“It is the wish of his family that these activities continue, and that we have proper closure to Toonik Tyme.

“We share their grief, and may God bless his family and his relatives at this time.”

The evening’s events carried on as expected, with performances by the Iqaluit band Kamaalukutaat, a fashion show headed up by Meeka Kilabuk, samplings of fish and caribou stew, and prize draws for festival-goers.

Organizers cancelled one event immediately after news of Oolayou’s death: the “Fear Factor” contest, which was to have taken place in the same venue, April 8, one day before the closing feast.

Oolayou, 44, was presumed to have drowned after searchers found his snowmobile tracks leading into the icy water in an area near Ward Inlet, early in the afternoon of April 7.

The Toonik Tyme Society responded with an offer to help Oolayou’s family. Amounts raised from the sale of raffle tickets for a qamutik loaded with camping gear to the family — which were initially intended to be included in prize money for the Iqaluit-Kimmirut snowmobile race — will now go to Oolayou’s wife Sheila and their family.

“Sandy was a well respected hunter and community member, who provided for his community,” Jimmy Noble, who provided the qamutik and drew donations of gear that were part of the prize, stated on the Iqaluit Public Service Announcements Facebook page, April 9.

“I am honoured by the [Toonik Tyme] committee’s decision to redirect the funds raised to help support Sandy’s family.”

Noble said he raised $13,440 from the sale of raffle tickets, which will now go to the deceased hunter’s family.

The Toonik Tyme Society, in collaboration with Alianait Arts, also plans to put on a benefit music concert for the Oolayou family on April 18, Heather Daley, executive director of Alianait, told Nunatsiaq News.

The Iqaluit band Kamaalukutaat made a quick decision to help the Oolayou family just before the closing feast.

The group first intended to cancel their show “out of respect for the family,” band member Stephen Innuksuk said.

“We were going to get paid [for our performance] by the Toonik Tyme committee, but given what happened, we decided we weren’t going to do it anymore,” he said.

“But then we turned it around to where we thought we could actually help the family, and donate our time towards helping them.”

Kamaalukutaat decided to go ahead with the performance, and pass their earnings on to the Oolayou family.

As a land program officer with Nunavut’s Department of Justice, Sandy Oolayou taught hunting and fishing to inmates of the Baffin Correctional Centre.

Shortly after earning recognition for his seal-hunting expertise during the annual Celebration of the Seal festival in Iqaluit in June 2013, Oolayou told Nunatsiaq News that he shared his knowledge of seal and caribou-hunting, and fishing with inmates and “sometimes young offenders” as part of his work.

He said his parents taught him hunting and “everything about seals” as he was growing up in Kimmirut.

Oolayou also stressed the importance of sharing the harvest, which he routinely did in Iqaluit.

“Sandy was always friendly, very kind, and a very good hunter,” Joanasie Akumalik, master of ceremonies for the Toonik Tyme’s closing feast, told festival-goers in a brief speech at the end of the event.

“He spoke highly of his children, and his wife, and he was always very proud of them,” he said.

“His soul is back home, on forever hunting grounds.”

Akumalik concluded with a call for a minute of silence, in memory of Oolayou.