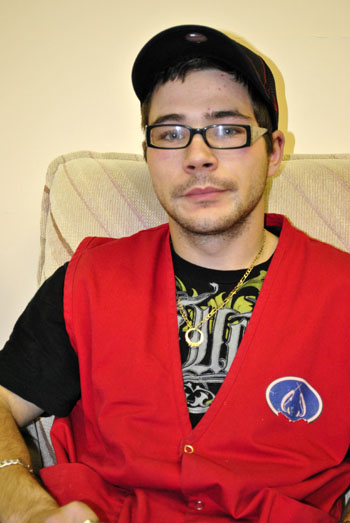 Arthur Wilson knows he’s a lucky man, after a bullet fired into his staff house unit grazed his head as he slept. To cope with the shock, he’s gone back to work. (PHOTO BY JIM BELL)

Arthur Wilson doesn’t like to think more than he has to about the bullet that this past Nov. 23 could have killed him in his sleep.

So the next day he got up and went to work.

“I was two inches away from death. I can’t sit on a couch all day and fret over it,” Wilson said Nov. 24.

Wilson, 24, was shot just two weeks to the day after he arrived in Nunavut from Moncton, N.B., to work at Arctic Ventures.

In an early morning fracas that involved police and an armed teenager, somebody fired two or three rounds in the direction of building 162, which used to house the old Iqaluit Candy Store and is now used by Arctic Ventures for staff housing and storage.

“I felt this sharp pain, like somebody hit me over the head with a baseball bat,” Wilson said.

He heard two more shots and realized bullets were entering the house.

Then his adrenaline kicked in. And he thought of Tamara, his sister.

“I hit the floor to duck for cover and crawled over to where my sister’s room is and I opened the room and yelled and said get down, bullets are coming through the house,”

Besides Wilson and his sister, at least three other people inside the staff house were endangered that morning: a woman, a six-month-old baby, and a man named Thomas.

One bullet that ended up between Wilson’s pillows is likely the round that grazed his head. He said another bullet landed one or two feet away from his bed, at about the same height.

A third round may also have entered the house, but Wilson isn’t sure about that one.

It was only after the immediate shock subsided that Wilson knew he had nearly been killed.

“I looked at my hand and saw it was covered in blood,” Wilson said.

He bled so much he worried if he would survive the wound.

An ambulance didn’t arrive until after police arrested the teenage boy alleged to have started the shooting incident.

Wilson rode to the hospital with the boy, who suffered a chest wound and had been brought into the ambulance in handcuffs and was bleeding badly.

“The van was full of blood,” Wilson said. “He was complaining a lot and swearing a lot.”

Police had arrested the boy near house 238 after they responded to a complaint of shots fired in the 100 block area of Iqaluit.

In a statement, police said “a man” confronted them with a firearm and that “shots were fired.”

But it’s not clear who fired the round that injured Wilson.

“Whose bullet hit me? That’s my big question right now,” he said.

When health workers told him the wound was just a graze, it felt like a big weight lifted from his shoulders, Wilson said.

But it left an ugly gash near the back of his head that required five staples to close. Health workers gave him oxygen to combat the shock, a supply of Tylenol, then released him from care.

Because the Nov. 23 incidents are police-involved shootings, the Ottawa police force is handling the investigation, as Nunatsiaq News reported Nov. 24.

Det. John Monette of the Ottawa Police Service is in Iqaluit to oversee the investigation, with help from RCMP members from the Northwest Territories.

The Nunavut RCMP are referring all requests for information and comment to the Ottawa Police Service. No Ottawa media person has yet been named to handle questions from reporters.

A police vehicle still guards the entrance to the staff housing unit where Wilson lives.

For the time being, he and his fellow workers are staying at the home of John Bens, the manager of Arctic Ventures.