“Hunter, do it for the Territory. Resign now” 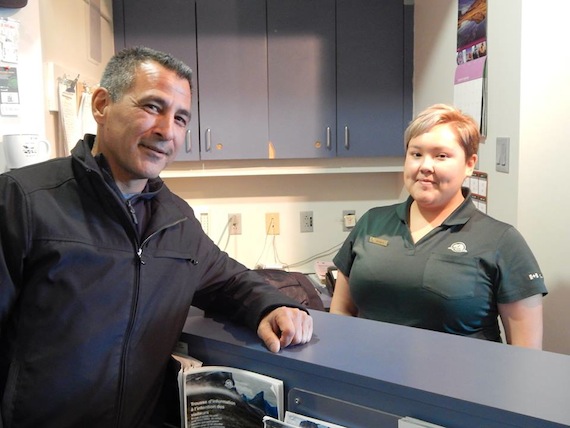 Nunavut MP Hunter Tootoo poses here with a Parks Canada employee in Pangnirtung, which Tootoo visited this past weekend. “Productive meetings with Mayor, SAO, HTO Chair and Elders and community members. Warm Welcome and great discussions – thanks,” Tootoo said on his Facebook page where he also posted this photo.

“This is the story of a beautiful, strong, resilient Territory which has some issues to deal with but will be challenged to do so because one shamed MP wants to collect his $150,000.00 salary.

“Hunter, do it for the Territory. Resign now,” says the petition, circulated online at change.org by Iqaluit resident Andrew Morrison, which he says he wants to deliver to Tootoo, Nunavut Premier Peter Taptuna and Nunavut Tunngavik Inc. President Cathy Towtongie.

Tootoo resigned in May as minister of Fisheries and Oceans and the Canadian Coast Guard and from the Liberal caucus in the House of Commons to enter addictions treatment— and then nearly two months later admitted to an “inappropriate relationship” with a female staffer in his Ottawa office.

Tootoo now sits as an independent.

“Having an independent MP is the worse-case scenario for our political landscape. The only solution is for Hunter to step aside and allow for the important work to continue,” the petition’s introduction reads. “Every conversation we hear is talking about the MP rather than all the actual critical issues we face in Nunavut that need our attention.”

Those issues requiring action, the petition says, include housing, mental health services, infrastructure and promotion of the Inuktut language.

Since Tootoo resigned, many have gone on social media to call for Tootoo to resign, as did many Cambridge Bay constituents who recently shared their opinions on Tootoo’s future with Nunatsiaq News.

Morrison told Nunatsiaq News that he was not sure what prompted him to start the petition.

“I know for sure that I am not the lone voice in Nunavut that would like to see him resign, but there are a number of us that are in a position where we can speak up about this where others, such as government or Inuit org employees, can’t. I have had lots of personal messages from all levels of government encouraging this petition and think it is a very messed up political situation in Nunavut when government and Inuit org employees aren’t aloud to express themselves freely. That is not democracy,” Morrison said.

His petition seeks support for Tootoo’s resignation because:

• Tootoo has “lost all political influence and is now completely incapable of fulfilling his role of representing, advocating, and lobbying on behalf of Nunavummiut;”

• only “major Federal intervention will solve the result of years and years of underfunding and neglect from the Federal government;” and,

• Tootoo’s “‘inappropriate relationship’ is not acceptable” — “Nunavummiut are left questioning how leaders get away with abusing their positions of power, what consent means when it comes to sexual relationships with staff members, what role going to alcohol rehabilitation played and the vagueness as to why exactly Hunter left. Young men in Nunavut should not be shown that this is acceptable.”

The list goes on, but the solution remains the same, the petition says, that Tootoo must resign.

“The potential was massive. This opportunity is gone,” the petition reads.

You can find the petition, which by early Sept. 7 had about 70 supporters, here.

On its website, the House of Commons lists six ways a member’s seat can become vacant, with that list including a member’s resignation.

If Tootoo resigned, the chief electoral officer for Elections Canada would have to issue a writ for a by-election within six months, the Canada Elections Act says.

A by-election could then be held at least 36 days after that writ is issued.