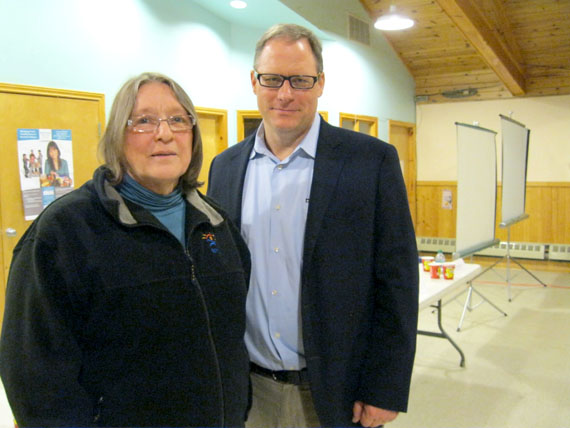 “I want to see what is presented to each individual [on their sales receipt] as clearly as possible,” said Nellie Cournoyea, vice chair of the board, at a public meeting in Iqaluit March 26.

Printing out savings at the point of sale would allow shoppers to see both “the price of the product and the discount, or subsidy from NNC,” Cournoyea said.

This would ultimately give Nunavummiut a better idea of any given store’s profit margins and subsidies passed on to consumers, “because they will be right there in front of you,” she said.

The NNC Advisory Board is an independent body set up to relay advice and report citizens’ concerns about the program to the minister of Aboriginal Affairs and Northern Development Canada, whose department runs NNC.

More that 40 Iqalungmiut attended the public meeting. The advisory board puts on one or two such meetings in northern communities every year.

He announced that AANDC Minister Bernard Valcourt has instructed the board to examine a reporting system recently adopted by the co-operative store chain in Nunavik.

“As of the start of this month, the Fédération des cooperatives du Nouveau-Québec has implemented in its 14 stores in Nunavik a point-of-sale in-store system,” Van Dine read from Valcourt’s written communication.

The system will “ensure that customers can see how and when the NNC subsidies apply, directly on their grocery bill,” he said.

The reporting system answers a demand for greater transparency in how grocery shoppers actually benefit from Nutrition North.

A report by the Office of the Auditor General of Canada last November highlighted the need for closer verification to show that the NNC subsidy is passed on to consumers.

“The advisory board has been quite seized with that question,” Van Dine said. “It had been something the program contemplated implementing from the start.”

The Nutrition North program covers every community in Nunavut, and select communities in the Northwest Territories, Yukon, and the northern regions of five provinces.

Nunavut’s share of the subsidy far exceeds other regions.

Van Dine reported that Nunavik had the second greatest share in 2013-2014, at 24 per cent, followed by Northern Manitoba with eight per cent, Northwest Territories at five per cent, and northern Ontario communities with four percent.

Iqaluit accounted for almost 11 per cent of Nunavut’s total share that year.

Iqaluit MLAs Pat Angnakak and George Hickes, who did not identify themselves as politicians, were ready to ask board members about their work, and odd disparities in pricing in grocery stores throughout Nunavut.

“I’m wondering why you meet so little,” Angnakak said, noting that the March 26 public meeting was just the sixth of its kind in Northern Canada since the Nutrition North program started in April 2011.

The MLA noted food insecurity is a constant concern in Nunavut, and asked what kind of advice the board has given to Valcourt.

Cournoyea answered that the board put much of its effort into implementing and adjusting the NNC program in its first four years of existence, after it replaced the food mail program run through Canada Post.

“After the change away from food mail, there was a great deal of concern about what happens from that time on,” Cournoyea said. “How do we distribute the dollars that are available?”

Board members deal with “several phone calls a week from people who are irate, and to try to make things better — and we try to work with them as well,” she said.

“It would have been very good if we had more money to deal with all the issues that people bring up,” Cournoyea said, noting that board members are serving “semi-volunteer positions.”

Hickes asked why prices of some foods covered by NNC are cheaper in communities that receive them from flights that pass through Iqaluit.

“The prices themselves are set by the store,” Van Dine answered. “The disparity in price between one community and the next really comes down to competition in price-setting that happens in that store.”

To avoid big disparities, the advisory board is “moving toward publishing pricing reports,” which AANDC would post online for public viewing.

The government would not consider fixing food prices, he added, reminding that NNC is a “market-driven model.”

“There are incentives in place for retailers to make the most efficient decisions on how to get goods into stores, at a price that’s most efficient,” Van Dine said.