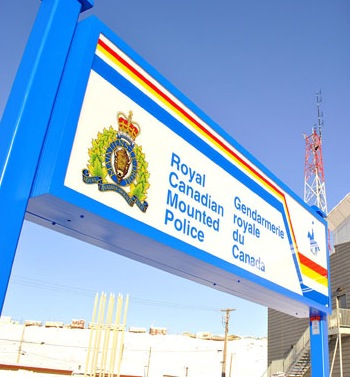 The RCMP “V” division headquarters in Iqaluit, also home to the Iqaluit RCMP detachment. Police report that in May 2013 they arrested 65 fewer people than in May 2012, suggesting that crime rates may be declining. (FILE PHOTO)

Police continue to report lower numbers of arrests in Iqaluit this year compared to last year.

Police arrests for May this year showed an exceptional decline, amounting to 198, 65 fewer than in May 2012.

“Most of the numbers are very promising,” said Sgt. Monte Lecomte, who delivered the Iqaluit detachment’s most recent RCMP report to city council, June 25.

“Crimes against the person are a little lower,” he said, partly because detachment members are doing more “proactive enforcement,” as he called it.

This involves checking on residents previously charged with criminal offences.

Traffic offenses were up to 25 from 13 in May last year.

The detachment provided relief to other Nunavut communities in May, Lecomte said. This help had no effect on service in Iqaluit as staffing levels were “close to full.”

In Iqaluit, drug offenses came to just three this year, down from six.

The sergeant said a police presence at shopping areas have deterred street trafficking.

That night “all the liquor establishments were inspected by the liquor inspector and our members, and traffic stops were conducted,” he said.

The effort led to 12 traffic tickets issued, one arrest warrant, a bootlegging charge, one 24-hour driving suspension and one charge for drug trafficking.

Officers got many positive comments during the traffic stops, Lecomte said.

“The public were really glad to see that happen.”

Fluent in Inuktitut, the new officer helped allay concerns raised earlier this year by Inuktitut-speaking councillors, who questioned the detachment’s ability to answer calls for service in the Inuit language.