First of two 22-hectare sites to be selected this summer 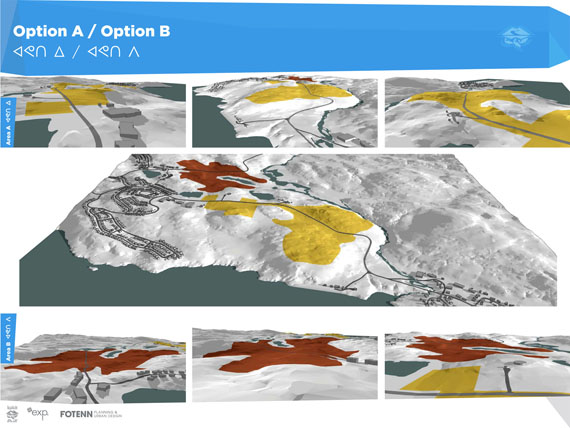 This relief map shows the City of Iqaluit’s next two areas slated for residential and commercial development. Area A, in yellow, is along the Apex Road and area B, in red, along the Road to Nowhere. The city will decide this summer which to develop first, for 2016, after they hear from the public. (CITY OF IQALUIT) 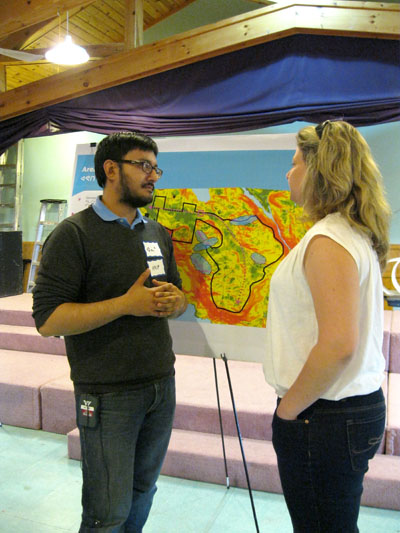 Arif Sayani, director of urban planning and development for the City of Iqaluit, chats with Robyn Campbell, the city’s sustainability coordinator, June 19 at an open house session on future development. Dozens of city residents shared their ideas on two sections of vacant land slated for residential, commercial and institutional development. (PHOTO BY PETER VARGA)

Iqaluit residents got a first look at the city’s next two areas for development June 19, and got a chance to share their opinions with city planners.

The city must chose which of the two, Area A or B, to develop first.

The city’s general plan outlines the city’s north and eastern limits as the next places for residential, commercial and institutional expansion.

Area A is outlined as a 22-hectare expanse halfway to Apex, and B, also about 22 hectares, just east of the lake subdivision along the Road to Nowhere.

“The general plan outlines a 20-year vision, so we project our population up to 2030,” said Arif Sayani, the city’s director of planning and development.

“We know that by 2030, we’ll be able to accommodate a population of 13,000 people in Area A, Area B, and all the other infill development in the core,” he said, referring to added building within the city centre.

If the city’s population growth continues on its current path, “we have to build both, no question about it,” the director said.

“But right now we have to decide which one first.”

The city’s June 19 open house on development outlined the features of each area.

Area A offers views of the bay, said Sayani, which make it attractive to many residents.

Its location might also attract greater commercial development for a few reasons, he said.

First, a large tract at the area’s west end, near the Arctic Winter Games arena, is reserved as a possible site for a new Nunavut legislative building.

“That has a lot of implications for A because that’s the major artery that links the whole community,” Sayanisaid , referring to the Apex Road.

“So you expect it makes sense to have commercial spaces out there.”

One key advantage Area B has over A is its relatively flat surface, he said. This means water-pumping and sewage infrastructure will be more costly.

Area B’s closeness to existing development will also make it less costly to develop, which could mean lower-priced real estate.

“If it’s that close to servicing, of course it’s going to reduce the cost. ‘A’ needs its services to be extended out a lot further, and that is going to impact the cost for sure,” Sayani said.

Engineer Steven Burden of EXP, the firm responsible for engineering in the new areas, said each will require new sewage lift stations, unlike other parts of the city.

“They can’t be serviced by gravity sewer, which is going to be a major piece of infrastructure,” he said.

Using added opinions and advice from the public, city planners will take their recommendations about areas A and B to city council for a decision in July.

The firm Fontenn Planning and Urban Design will then draft design plans for the selected area.

“We’ll come back in September to do a preliminary design workshop,” said Michelle Armstrong of Fontenn.

“We’ll prepare some alternative plans, drawing from some of the ideas that we’ve heard.”