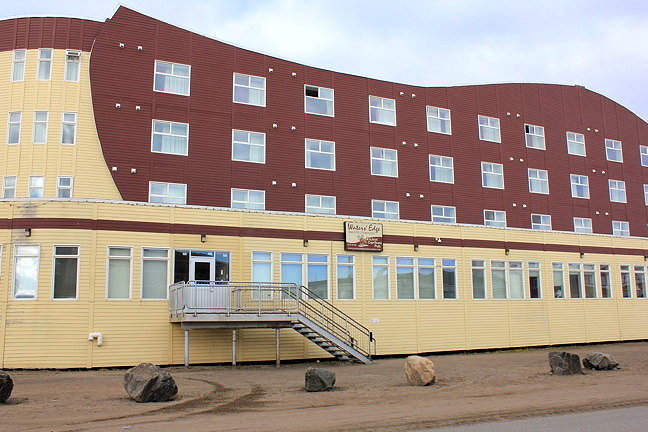 The Waters Edge Seafood and Steakhouse restaurant, and the Kickin’ Caribou pub, will shut down for good by the end of regular hours today, Friday, Aug. 25. (FILE PHOTO)

Iqaluit’s Waters’ Edge Seafood and Steakhouse restaurant and the Kickin’ Caribou pub are set to close for good, now that a judge has lifted a temporary injunction that allowed the restaurant to operate until the end of September while it awaited an appeal over the terms of its lease at the former Hotel Arctic.

The restaurant and pub will now close its doors Aug. 25 after regular hours, staff said on Facebook.

James Morton, the lawyer representing restaurant owners Kim and Donna Waters, confirmed Aug. 23 that his client’s appeal against a court decision, launched last month, will now seek damages instead of the right to continue operating within the building.

The Hotel Arctic’s previous owner, Northview REIT, completed the building’s sale to Qikiqtaaluk Properties on July 28, under the condition that it would be vacant by the end of August.

But the owners of Waters’ Edge, and the adjacent Kickin’ Caribou pub, claimed they had a lease to operate inside the building until 2023.

A judge ruled against that claim in July, but the restaurant owners appealed, with a court date set for Sept. 19.

With the temporary stay lifted, Qikiqtaaluk Properties now has the ability to continue with the Hotel Arctic’s renovations.

According to court affidavits filed in the appeal, the Inuit-owned Qikiqtaaluk Corp. subsidiary plans to turn the hotel into a residence and satellite campus that will be leased to Nunavut Arctic College.

But with the start of the school year less than two weeks away, court statements from both Qikiqtaaluk Properties and NAC say it would be challenging to meet a deadline to reopen the building as a school within the first weeks of classes.

“It was acknowledged that, while not impossible, the schedule to completely retrofit work of the leased space [in Hotel Arctic] would be extremely tight,” said the Qikiqtaaluk Corp.’s director of project development and partnerships, Sheldon Nimchuk, in an affidavit filed with the court Aug. 18.

Contractors have been told to expect to work double shifts due to the tight deadline, Nimchuk said, as they convert the top floor of the hotel into bachelor, one-bedroom and two-bedroom suites for students.

Furniture and equipment for the building is to arrive by air freight, and the space occupied by the restaurant will be divided into classroom, student space and a cafeteria, the affidavit said.

In his own affidavit, NAC President, Joe Kunuk, said the college’s new law school is expected to operate within the building.

That program is scheduled to begin by Sept. 12, but construction will be ongoing from the time the students arrive and will not be completed until mid-October, Kunuk said.

Kunuk warned in his affidavit that if the restaurant remained on the premises beyond August it would jeopardize the NAC’s full roster of 2017-18 programs, as the NAC is already short of class space due to renovations and expansions at its main Nunatta Campus.

Qikiqtaaluk Properties bought the Hotel Arctic for $14.9 million as part of a bid for two RFPs issued by Nunavut Arctic College to lease residential, programming and office space.

As of the time the affidavits were filed, neither of those leases had been officially signed, but Nimchuk said he “fully anticipates” the residential lease with NAC to be finalized “shortly.”