“It really is a fun event with a lot of teasing” 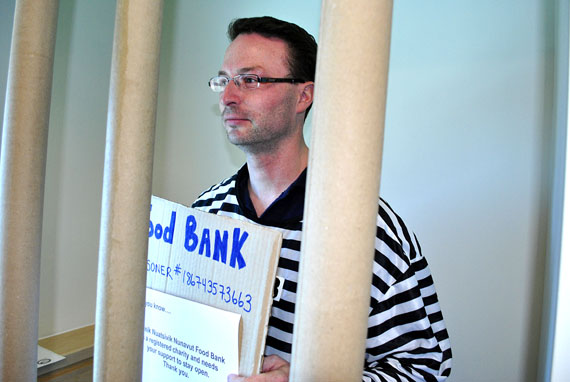 A victim of the Iqaluit RCMP’s 2011 Jail-N-Bail fundraiser languishes in detention while he waits for a generous donor to post his bail. (FILE PHOTO)

Do you someone ready to do hard time for a good cause?

RCMP summer students will “arrest” unsuspecting scofflaws and take them to a mock jail inside the RCMP Iqaluit detachment front lobby boardroom.

“Concerned citizens” can call the RCMP at 975-4418 or drop by the headquarters at the Government of Canada building to request the arrest of their spouse, boss, politician, friend or co-worker.

When participants arrive at the jail, their bail is set.

With telephones and telephone books provided by the RCMP, the jailbirds make pledge calls to friends, relatives and co-workers to earn their bail and be released.

“Well, most incarcerations last for half an hour to one hour — but that all depends on your bailers,” says Chief Supt. Steve McVarnock with a broad smile.

“It really is a fun event with a lot of teasing and joking around, all the while raising funds for the Niqinik Nuatsivik Nunavut
Food Bank,” he said.

McVarnock added that in addition to raising funds for an important cause in our community, donations over $20 are also tax deductible.