“It’s a new day and that means something. That means opportunities” 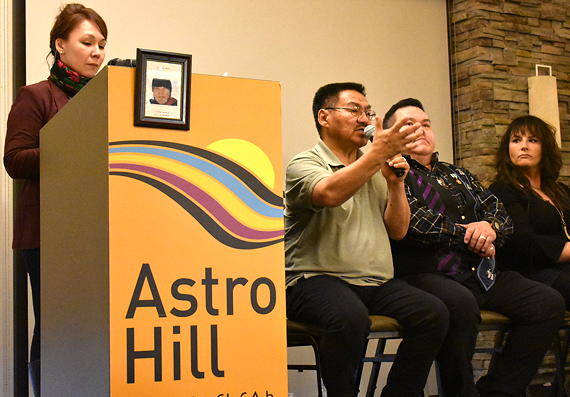 The Life After Dark event, hosted by the CBC, was held at the Frobisher Inn in Iqaluit on Saturday, Oct. 27. The panel discussion focused on healing after suicide-related trauma. (PHOTO BY COURTNEY EDGAR)

A box of tissues was ready on each row of chairs in the Koojesse room of Iqaluit’s Frobisher Inn on Saturday afternoon.

These were put to use by many at a panel discussion, organized by CBC North, about healing after suicide-related trauma.

Starting with a discussion of Suzanne Sagmeister’s coffee table book, Life After Dark: 100 Stories from Survivors of Suicide, the event later turned its focus to local survivors and how the community can move forward together.

The book by Sagmeister, who participated in the discussions, is primarily a photography project, but it also documents the author’s own experience of losing a loved one who died by suicide and the impacts it had on her own mental health.

Sagmeister said she had a turning point when she was in Iqaluit in 2015: she got lost out in the tundra but soon realized the power an inuksuk had.

“I get it, someone has been here before,” Sagmeister said.

“I realized, ‘Wow, if we could all just realize the power of our stories just the same—I have been here, I get it, like the inuksuk.’”

MLA Pat Angnakak, former minister of health and energy, who was stripped of her portfolio last week for what the premier called a breach of confidence, also spoke at the event.

“We all have our trials and tribulations but, you know what, it’s a new day,” Angnakak said.

Both a friend of hers and a family member died by suicide.

“You want to try so much to take away the pain from those that you love but a lot of times life doesn’t come with those kind of instructions,” Angnakak said.

“None of us are experts in any one area, but we really need to work together and rely on each other, even if we don’t even know each other. We all want to work to that one goal. Even if it is one person, to still feel that it’s going to be a new day tomorrow. It’s a new day and that means something. That means opportunities.”

Angnakak also brought up bullying. She hears about it with her grandchildren. But she added that bullying happens to adults too, no matter their position.

City councillor Joanasie Akumalik told his story about the anger and grief he felt when his son died by suicide a few years ago. He had been on his way to bring his son a soda pop when he found his son.

A framed portrait of Akumalik’s son was hung at the top of the podium throughout the length of the event.

This was repeated later by Jimmy Akavak, a former police officer, who is part of a support group that takes men out on the land.

It was also repeated in stories which members of the public told about impacts of colonial violence, trauma and generations that have been “caught in between cultures.”

They also talked about the power of sharing their stories, to let people know it is okay to seek support and to remember the people that have kept them going.

MLA Adam Lightstone, who spoke at the beginning of the event, brought his young son to the podium with him, explaining his child has given his life new purpose.

“He is a source of hope and inspiration for me…. It is important to remember what brings light into your life, which is why I think an event like Life After Dark is so important,” Lightstone said.

As he introduced Sagmeister, Lightstone acknowledged that suicide and mental health issues have reached a crisis point and should be one of the territory’s top priorities.

“Since the creation of Nunavut in 1999, there has been far too many instances of suicide and it is unfortunately one of our statistics that makes Nunavut stand out in Canada and the world…. It is not just up to our government to tackle this. It is far too difficult for government to do on its own so it is up to us, to do as community members, as individuals and organizations. We all play a role in bringing Nunavut into the light.”

The CBC plans to hold similar events other northern communities. The next one will take place in Whitehorse.