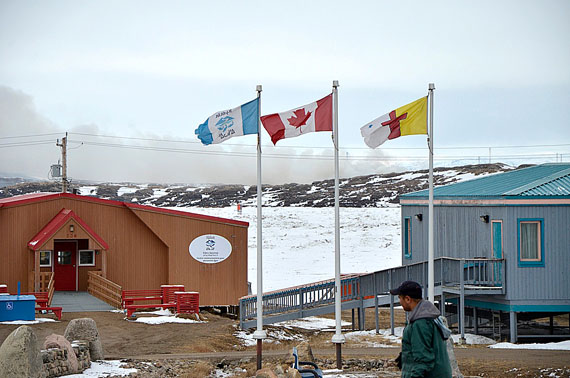 Iqaluit residents with asthma or COPD should stay indoors, if possible, when smoke from the city’s perpetual dump fire blows through town, an air pollution expert advises. (PHOTO BY DAVID MURPHY)

As Iqaluit’s dump fire continues to burn through May 22, an air pollution expert says Iqaluit residents with asthma or COPD — chronic obstructive pulmonary disease — should stay indoors if possible.

Since May 21, winds have blown over Iqaluit from the east or south-east, pushing the smoke into built-up areas of town.

Environment Canada predicts the wind direction will change to the north-northwest later on May 22.

If you’ve got an illness or a lung disease such as asthma or chronic obstructive pulmonary disease, Allen advises you to stay indoors while smoke from the fire blows over Iqaluit.

Those with pre-existing illnesses should “try to avoid strenuous activities outdoors while the air is smoky, Allen said.

But you’re a healthy adult, you probably have little to fear. The general public is “unlikely to be affected, really, at all by an event like that.”

Allen said, however, the longer someone is exposed to smoke in the air, the greater the health risk.

So there’s a benefit to “putting out the fire sooner rather than letting it burn.”

Although even after a few weeks of exposure, Allen said the risks are modest at best — although Allen admits he does not know what environmental poisons are pouring out of the dump fire.

Some of those toxins produced by the dump fire can be harmful, and even cancerous, said Paul Crowley, an Iqaluit-based environmental lawyer.

“I would hope they put it out as soon as possible,” said Crowley said.

Crowley, on behalf of a citizen’s group, filed a lawsuit in 2001 to stop the city open-air burning of garbage, which was then a regular practice.

Crowley lost the case, but the city afterward stopped the open-air burning of garbage.

Now, the city needs to put this fire out immediately, Crowley said.

“Furans and dioxins are some of the most cancer causing agents that are known. We already have high loads up here because of toxins that come from far away that gets deposited in the cold,” he said.

“Adding our own to it this way — it’s just not a good practice.”

“We now understand that open burning of garbage — even seemingly harmless materials like paper, cardboard, yard waste, and construction debris — releases a hazardous mixture of cancer-causing compounds and other toxic substances when open-burned.”

The Iqaluit dump fire started the afternoon of May 20.

At an emergency Iqaluit City Council meeting later that night, the council agreed with Iqaluit fire chief Luc Grandmaison’s recommendation that the fire should just burn itself out.

Grandmaison’s reasoning is that pollutants might leach out of the landfill through water runoff, if more water is used to douse the flames.

And Iqaluit public works staff need to conserve drinking water for the rest of the town.

Water trucks poured more than 64,000 litres of water on the fire, but to no avail.

The fire is described by Grandmaison as a “volcano” and is located deep within the 40-metre-deep garbage pile.

John Mabberi-Mudonyi, the acting chief administrative officer, said the dump fire continues to burn, but is “under control.”

Mabberi-Mudonyi also said he doesn’t know what kind of material is getting burned at the dump.

In a May 21 public service announcement, the City of Iqaluit said the landfill site continues to burn.

The city also said there will be no garbage drop-off at the dump until further notice, and that household garbage pickup-up will be scaled back to once a week.

A layer of overnight snow may have temporarily doused the Iqaluit dump fire May 22.

Iqaluit firefighter Mark Dainton said on Twitter early May 22 that the “night shift crew said that the snow has just caused most of the open burning to stop.”

But later on May 22, the fire continued to produce a huge column of smoke.

Ken Donnelly, president of the waste management consulting firm Beyond Attitude Consulting, said landfill fires occur regularly, and all over the world.

Although the fires are “extremely” tough to extinguish, he said.

“Landfill fires often last a long time. I was on a landfill in Mexico for a long time and it has been on fire for years,” Donnelly said.

“It’s usually pretty hot, so it’s kind of difficult to get into the land fill with heavy equipment and open it up in order to fight it,” he said.

“And they can sometimes go for a long, long time.”