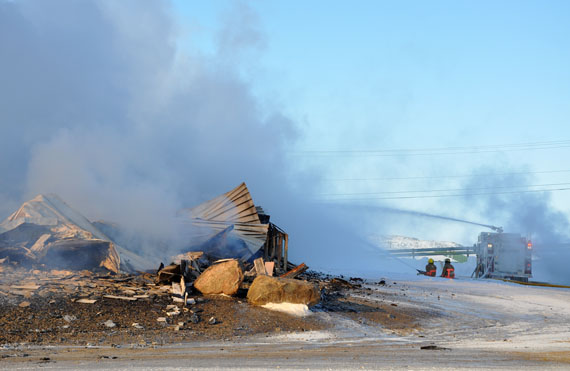 Early Feb. 27, Iqaluit firefighters continue to battle the blaze that ripped through Creekside Village late Feb. 26. Officials have not confirmed any deaths or injuries in the fire at this point. (PHOTO BY SARAH ROGERS 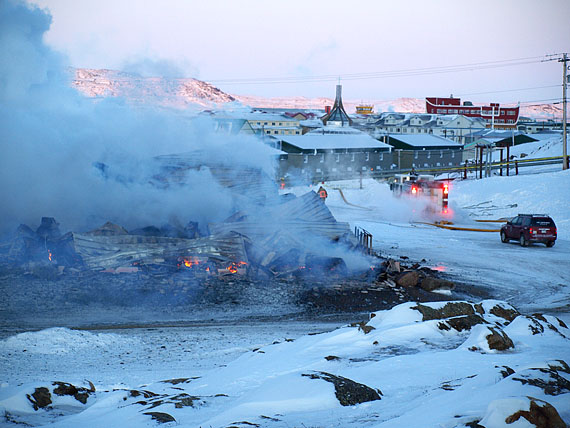 As the sun rose in Iqaluit Feb. 27, firefighters remained at the scene of the blaze which burned a 22-unit block of row houses in the downtown Creekside Village complex, also known as “White Row.” (PHOTO BY DEAN MORRISION)

Firefighters remained Feb. 27 on the scene of a disastrous fire at Creekside Village in downtown Iqaluit as the remnants of a block of row houses continued to smoulder and the weather remains bitterly cold, with windchills of – 48 C.

In Iqaluit, some roads remained blocked, including Queen Elizabeth Way in front of Nakasuk Elementary School, which suffered flooding from water used to fight the fire during the night.

Nakasuk, located within sight of the fire scene, remained closed due to the closure of roads. The city’s three other schools also closed for the morning. They are to re-open during the afternoon on Feb. 27.

Donations for 300 fire victims can be dropped off at Nunavut Research Institute, with a list of needed items posted there.

Arctic College students received updates from college officials at its Ukkivik residence during the morning of Feb. 27.

“Students are really upset about this,” said said NAC dean Peesee Stephens. “Out main priority is getting housing for all the students affected by fire.”