Iqaluit skate park shuts down due to decreased use 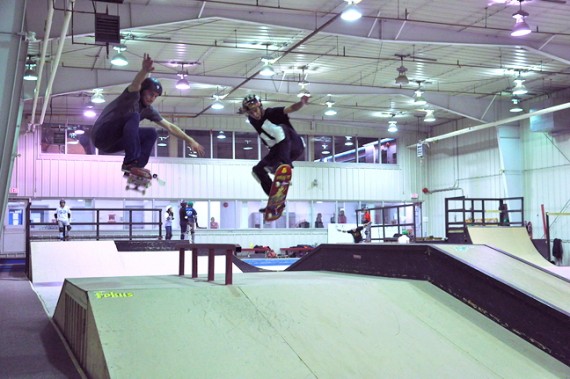 Isaac Daniel Idlout, right, soars over a ramp at the Iqaluit skate park during a summer skate camp in 2015. Nick Gauthier, left, was a leader at that camp.
(FILE PHOTO)

The City of Iqaluit has chosen not to open its skateboard park this year, following a drop in daily attendance.

The park—fitted with ramps and rails for ambitious young boarders—opens each May.

But on Sunday, the City of Iqaluit posted a notice on social media explaining that the skate park will not open this year.

“Skate park use has dropped significantly in the past few years. Last season there were many days where no one attended,” said the post. “Taking this into consideration and recognizing that the space could be used for other recreational activities, the skate park will not be opening this season.”

Last year, a drop in attendance at the skate park saw fewer than five youth on average use the facility each day, the city’s recreation director, Amy Elgersma, told Nunatsiaq News.

“We want to make sure our facilities are well used and that we are serving the needs of the community,” she said.

This doesn’t mean the curling rink will be closed to youth this summer. The recreation department has plans to start up indoor games like floor hockey, mini-golf and tennis.

“We’re going to start off a tee-ball program in the curling rink and then move it outdoors,” Elgersma said. “We wanted to explore some other opportunities….That doesn’t mean that we’re never going to reopen the skate park.”

Shortly after the city announced the decision not to open the park, Iqaluit resident Carine Chalut started an online public petition asking the city to reconsider the closure. That petition, started Sunday morning, now has more than 170 signatures.

“The skate park is a well-loved venue and allows the kids to enjoy hours of physical activity at low cost,” the petition reads, going on to say that closing recreation programs directly impacts the mental and physical well-being of Nunavut youth.

“The city should try a little bit harder. We have all the infrastructure. Everything is there,” Chalut said. “Maybe they need to look at why they have this drop in attendance.”

Chalut’s three young sons look forward to the skate park opening each spring, she said, especially after sports like hockey and basketball wrap up for the school year.

“The kids are very disappointed … skateboarding is one of the few things left in the summer,” Chalut said.

But Elgersma said there will be no shortage of activities for youth.

Besides activities planned for the curling rink, the Arctic Winter Games Arena will offer soccer and a new youth dodge-ball program. There will also be a summer day camp based at the arena where children can go hiking, learn to cook and make arts and crafts.

“One of the biggest groups that used the park was our own summer camp,” she said.

City recreation staff will look at installing one of the skate ramps at the curling rink for part of the summer.

While summer camps often cater to young children, Chalut said that the “cool” sport of skateboarding is often attractive for older youth who aren’t interested in organized team sports.

“Where is the commitment of the city in regards to mental health for youth if they are removing recreational activities?” she asked.

Elgersma said teen use at the skate park has been low, and that new programs will look to engage that age group.

“We are committed to creating safe, healthy spaces for youth,” Elgersma said. “We want to make sure that we have a recreational space that everyone can use.”

At the invitation of Iqaluit Mayor Madeleine Redfern, skate park supporters are planning to attend an upcoming meeting of council to talk about how to keep the park open, Chalut said.