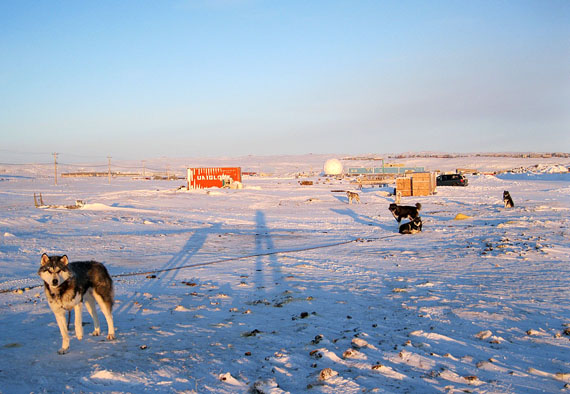 The Government of Nunavut plans to install an asphalt plant on this plot of land in the West 40 area of the city along Hubbard Drive, which is occupied by dog teams in the winter. (PHOTO BY PETER VARGA) 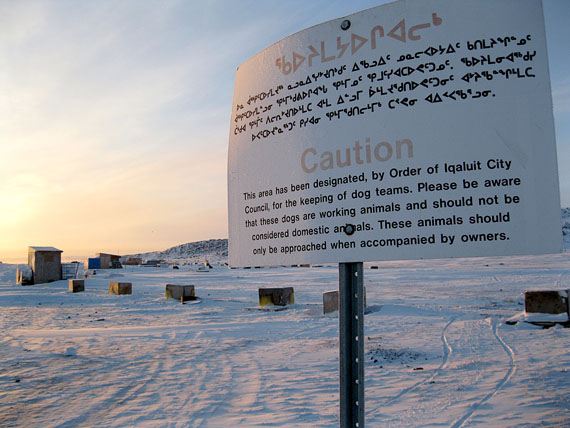 This sign at Iqaluit’s West 40 sled dog site, which hosts 10 dog teams, says the area is designated by Iqaluit city council for dog teams. But the city doesn’t own the lot and the designation is not legally binding. Dog teams on the lot will have to depart by June 1 to allow the real owner, the Government of Nunavut, set up an asphalt plant. (PHOTO BY PETER VARGA)

Sled dog owners in Iqaluit will soon have to clear out of a large lot they thought was reserved for their use but never was — at least not legally.

The sprawling site in the city’s West 40 area, where Iqaluit sled dog owners routinely keep their dogs in the winter, is zoned for industrial use.

That’s just what the land’s owner, the Government of Nunavut, needs it for.

The contractor building and repaving the new Iqaluit airport, Arctic Infrastructure Limited Partners, wants to use it for an asphalt plant.

The project includes a massive, non-stop paving job for the airport’s 2.7-kilometre-long runway and its adjoining taxiways and aprons.

This calls for a back-up asphalt plant, which the government plans to put up on half of the area now occupied by the sled dog owners’ dog teams.

Airport project managers decided that the sled dog area, which takes up a parcel along a 330-metre length of a road called Hubbard Lane, is the best place to put it.

“In my eye, and in the eyes of the asphalt plant owners, that seems to be the best location for it,” he said.

The sled dog area sits squarely within a much larger section of land reserved for the airport, which the territorial government has agreed to transfer to the city.

The larger plot covers most of the West 40 area, extending from the southwest corner of the airport to the Sylvia Grinnell River.

It’s where the airport’s first builders actually built a second runway, which eventually became a stretch of road lined with commercial businesses and industrial buildings — known today as Akilliq Drive and Hubbard Lane.

The GN has been in talks on airport land transfers with the City of Iqaluit since the fall of 2013.

The total area of land to be transferred to the city is about 42.5 hectares, and the West 40 area is the largest single area of land involved in the exchange.

“Among other things, one of the reasons that we want to put this into the city’s hands is that industrial land is in short supply, and we don’t want to be the ones who are leasing, managing and determining the shape of the city,” Hawkins told Nunatsiaq News.

“That’s one of the reasons why we want to transfer this land to the city.

“But, along with that, we have this large project on the go here,” Hawkins said, pointing to the airport development.

“We need to have a place to put an asphalt plant.”

The best place for the plant also proved to be a prime location for Iqaluit’s sled dog owners, where they have tied up their dog teams for 20 years.

Dog team owners set up shop on the land around 1994, based on a promise from the city that it would somehow acquire the land, and reserve it for dog teams.

The city never delivered on that promise.

“We’ve been told that [the land] would be set aside for sled dogs, even though the town didn’t own it,” said Matty McNair, who has kept a plot for her sled dogs at the site since it opened for use by sled dog-owners in the mid-1990s.

“Even though the town didn’t own it, they were hoping to acquire it,” she said.

Sled dog owners considered many other locations to keep their dogs throughout the city, “and that just looked like certainly the best spot for them,” McNair said.

“We always knew, since we had our dogs over there, that the land belongs to the airport,” said sled dog owner Louis-Philip Pothier, who also keeps his dogs at the West 40 site.

“We always knew that they had agreed for us to keep our dogs over there, but that we had to be able to remove them on short notice. That was the deal.”

The city’s regulations on sled dogs, bylaw 537, called the “Canadian Inuit Dog and Dog Team By-law,” refers to “designated dog team areas,” and refers to an “Appendix G” and “Schedule G,” where the areas should be identified.

At the end of the document, the bylaw states that schedules A to E “are attached,” but fails to mention any appendix or schedule G.

City administration told Nunatsiaq News that the bylaw has no such attached sections.

Moreover, the city’s planning and lands department told Nunatsiaq News that the city has no “designated” sled dog areas in its records.

Sled dog owners, however, say they have an understanding with the city that they can keep their dogs at three locations in the community.

And all three locations, including the West 40 area, have signs posted on-site, which read: “Caution. This area has been designated, by Order of Iqaluit City Council, for the keeping of dog teams.”

The city’s dog team bylaw dates back to 2001, and is signed by the mayor at that the time, John Matthews.

The city drafted a new bylaw in 2013, called the “Responsible Pet Owner and Sled Dog By-law,” which will cover all matters relating to dog teams, and pets in general.

The new bylaw passed first reading in 2014, and is now under legal review, according to city administration.

The city expects the new bylaw will be put to second reading “in the next couple of months,” Tracy Cooke, the city clerk, told Nunatsiaq News in an e-mail, Jan. 8.

“Over the years, bylaws were written down, and then re-written,” Pothier said of the current dog team bylaw.

“And then, the problem is, at some point there were areas [of land] that were designed as dog team areas, and they (the city) later on found out that they did not own these pieces of land.

“It was written down, but they were not able to implement it,” he said. “So the whole question of dog team areas is very, very vague. And that’s what we’re asking the city – to put more work on this specific case, so that we could actually have areas that are properly designed as dog team areas.”

Pothier and a fellow West 40 dog team owner, Andrew Maher, met with Hawkins this past fall on behalf of all dog team owners at the site, to hear out the government’s plans.

The airport project builders plan to install an asphalt plant in the summer or 2015, on half of the land occupied by the dog teams — specifically the west end, closest to the Sylvia Grinnell River. About 10 dog team owners occupy the site.

Pothier said the dog teams that occupy the areas of the planned plant – four or five of them – must clear out of their plots by June 1.

Others at the east end of the area, closer to the city, may stay one more winter, he said, and may keep their gear at their West 40 sites this summer.

“The first couple of teams that won’t be touched this summer are walking on a thin line,” Pothier said.

Airport authorities plan to eventually lease the entire West 40 site, “so it might be a matter of a year, maybe two extra years that they (unaffected dog teams) could keep their dogs over there,” he said.

“But eventually we’ll have to be out of there, all of the teams.”

In the summer, most dog team owners keep their animals in another area known as “Upper Creek,” just east of the airport parking lot.

The dog team owners must meet with the city over the next several months “to find an area big enough and good enough for everyone, where we can have all the services we need, and access to the land for running the dogs,” Pothier said.

Their long-term priority is to get the city to establish “formally designated dog team areas,” he said.

“Not just areas we use to keep dogs, but actually have the city put in boundaries and limits, and designing maps where we could say that’s our spot.”

For its part, the territorial government will help find a site for the dog team owners “where they could get longer tenure, and more secure,” Hawkins said. The West 40, however, is “prime land” for industrial and commercial development, he said.

The asphalt plant, owned by Iqaluit-based Kudlik construction, will serve as a back-up for another plant devoted to paving work at the airport until the project is completed by the end of 2017, Hawkins said.

The West 40 plant will also be available for use in all other paving projects in the city, other than the airport.

“We’re still in discussions with the city about whether that is the best place to put an asphalt plant,” Hawkins said, adding, “there isn’t another piece of land on airport property that is well-suited.”