Monica Nuqingaq and her son, Mosha, head home to their two dogs shortly after the standoff ended. (PHOTO BY THOMAS ROHNER) 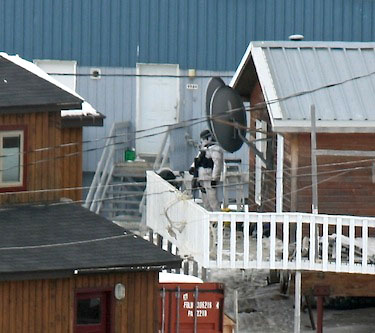 An armed member of the RCMP in camo-gear stands on the porch of house 1671 shortly after the standoff there ended at 10:07 a.m. April 30. (PHOTO BY PETER VARGA) 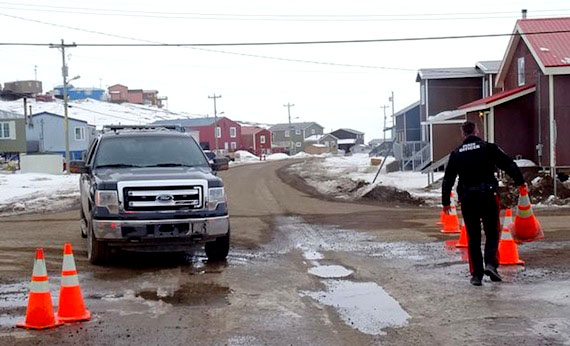 Standoff over, barricades down: Sgt. Michael Hatch of the Iqaluit Municipal Enforcement Office removes barricades from roads leading to the city’s Happy Valley neighbourhood, whose residents endured a lockdown from 4 p.m. April 28 to shortly after 10 a.m. April 30. (PHOTO BY JANE GEORGE)

The armed standoff that started April 28 in Iqaluit’s Happy Valley neighbourhood ended at 10:07 a.m. and as of 2 p.m., all of the barricades were down.

At 10:30 a.m., Sgt. Michael Hatch of the Iqaluit Municipal Enforcement Office removed barricades on roads leading to Happy Valley that had been under a lockdown from 4 p.m. April 28, to shortly after 10 a.m. April 30.

Barricades remained for a short while in the vicinity of house 1671 on Atungauyait Drive. They have since been removed.

An RCMP officer there said the standoff ended peacefully.

RCMP Const. Malcolm McNeil later confirmed for Nunatsiaq News that “the standoff is over without injury.”

Residents started to return home almost as soon as the barricades came down.

Monica Nuqingaq and her son, Mosha, headed home to their two dogs shortly after the standoff ended, with a bag of dog food.

Others went to visit family members who had been obliged to stay in the area under a lockdown.

A woman who said she was related to the young man alleged to have been involved in the standoff told Nunatsiaq News that she hoped he was alright.

By this afternoon, life appeared to be back to normal in Happy Valley.

Roger Bélanger, who had spoken on two occasions with Nunatsiaq News about life behind the barricade, was out driving his taxi at 2 p.m. and his wife’s home daycare was lively again.

A parent of two of the five children who had been evacuated from the daycare during the evening of April 28 described waiting to reunite with his children at Joamie Elementary School was “stressful,” but they suffered no trauma. He said he was relieved that no one was hurt.

Residents of the group home directly across the street from house 1671, where the standoff took place, were also moved out of their residence April 29. They returned to the residence April 30 after a night in the hotel — which, to them, felt like being on vacation, according to an employee.

On Twitter, April 30, others shared good news stories from what was a difficult occasion — such as how one woman watched an entire season of Louis and eight episodes of Cosmos “and still didn’t start her taxes.”

Another tweet shared a story about a woman who left a turkey in the oven when they left their home April 28. But they weren’t able to get it out of the oven after the lockdown started.

“They gave the keys to the fire department, who gave them to the RCMP, and at an appropriate cooking time, they went in and took it out of the oven. She was really happy to be having it for dinner tonight with her family.”

Nunavut Premier Peter Taptuna said in a tweet April 30 that he was, “pleased to hear that all Happy Valley residents are safe — big thank you to RCMP for your hard work.”

Nunavut MP Leona Aglukkaq also offered her thoughts on Twitter. “Relieved to hear the situation in Iqaluit has been resolved peacefully. Big thank you to the @rcmpgrcpolice for your work the last few days.”

As soon as the barricades were removed, municipal water delivery and sewage pick-up trucks started their rounds in Happy Valley, much to the relief of those not attached to the utilidor system.

And more than 200 students, not all of whom live in Happy Valley, returned to school when Joamie Elementary School reopened at 1:05 p.m. April 30.

Visited in the evening of April 30, Bélanger, his wife Beverly and their son Adam said they could finally relax.

But Bélanger, who returned immediately to his work, said that after the standoff ended, he felt exhausted.

But he and Beverly said they felt luckier than most in Iqaluit because they knew what was going on: police had told them on the 28th that “this guy has a gun, he’s fired five shots, but he’s not going anywhere,” which made them feel less afraid.

And they said they prayed for the RCMP members, who were putting their own lives at stake, as well as for the young man in the house because “after all, he was in pain.”

(with files from Jane George and Thomas Rohner) Apart from the yellow police tape, this house, where an armed standoff took place for more than 40 hours between April 28 and April 30, looked as peaceful as any other house in the normally peaceful Iqaluit neighbourhood of Happy Valley. (PHOTO BY JANE GEORGE)