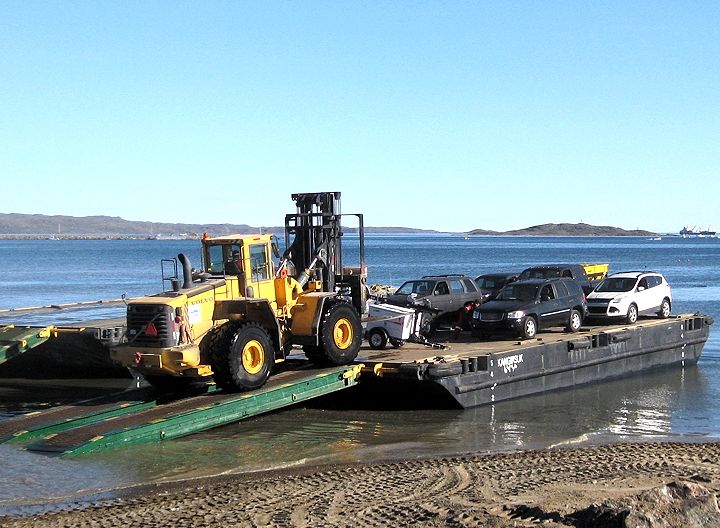 A barge-load of vehicles hits Iqaluit’s beach during the 2013 sealift. The city’s ballooning population of vehicles raised questions and concerns at an Aug. 26 council meeting. (PHOTO BY PETER VARGA)

“According to recent news reports, there are 5,500 vehicles in Iqaluit,” Iqaluit resident Janet Armstrong told council in a brief citizen’s presentation. “Approximately 300 new vehicles are added each year. For 23 kilometres? Does no one walk? Does no one ride a bicycle?” she said, pointing to the community’s limited road network.

“We are no longer a tiny community where everyone is safe from accidents.”

Armstrong drew the vehicle figures from a recent CBC news report, which estimated the ever-increasing traffic seen on the city’s limited roads, year after year.

Some 5,500 cars and trucks in a city with a population close to 8,000 means more than one vehicle for every two residents.

On top of that, Armstrong claimed that the city’s two large retailers, Northmart and Arctic Ventures, brought “about 345 kids’ bikes” into the city this year.

“Has the city thought about how they are going to deal with this?” she asked. “There are way, way too many vehicles for such a small community, both in population and size.”

Armstrong recalled how a road accident which sent two young girls to hospital in July occurred on a busy stretch of Queen Elizabeth Way, in front of Arctic Ventures.

The victims, aged four and six, were riding their bicycles at the time.

The incident occurred near the site of a fatal accident that took the life of a young boy of similar age, almost exactly a year before.

The 2013 accident drew an extensive response from the city which included painted crosswalks, speed signage, and roadway speed bumps.

Although Armstrong complained about traffic to highlight her demand for increased road safety for cyclists, her point about the steep increase in vehicles was not lost on councillors.

Coun. Terry Dobbin mentioned the concern in his member’s statement but he focused on another effect of massive car and truck imports into Iqaluit: derelict vehicles.

“The city already has hundreds of derelict vehicles lying around, all over town, and no exit strategy really to get rid of them,” Dobbin said.

Council actually passed a motion in 2013, exactly a year before the meeting, calling for the city to address derelict vehicles “in time for the next sealift season.”

“I don’t think there’s any action taken on that issue,” Dobbin said. Waste vehicles can leak toxic contaminants such as lead and mercury, he added.

“We need to have an exit strategy on these vehicles in place before the situation gets out of hand.”

“I would indicate that 60 per cent of all registered vehicles in Nunavut are basically in Iqaluit,” he said.

One solution is to charge an import levy at the territorial level, which could be transferred to the city “to offset the cost of vehicles when it comes time to crush and send these vehicles back south,” he said.

In response to Armstrong’s comments and suggestions on safety for cyclists, Coun. Stephen Mansell said the city’s public safety committee, which he chairs, has marked road safety as a priority.

“We can definitely add bicycle safety to our discussion,” he said. Given the time of year, Mansell added he couldn’t promise the city would add safety features to the city’s roads before the onset of winter.