“If they feel equipped and supported, they will stay” 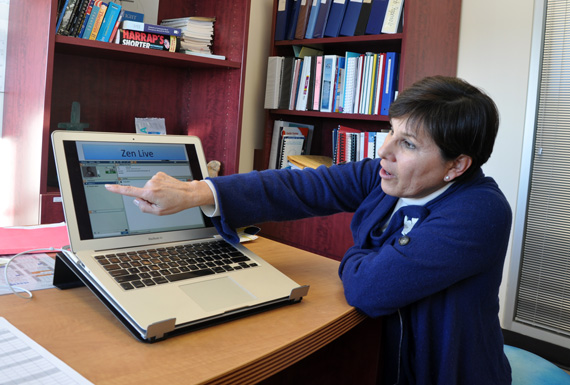 When Oleepeka Metuq started teaching in 2001, the Inukjuak woman knew she had found a career she wanted to stick with.

To prove her commitment, the young mother took a leave from her job at Innalik school to study towards her bachelor degree in education at Nunavut Arctic College in Iqaluit.

But three years into the program, an unexpected pregnancy forced Metuq to leave her studies.

Metuq, like many Inuit teachers working in schools across Nunavik, are already raising young families at the time they’re hired by the Kativik School Board. And few have any previous formal training in education.

That’s made training Nunavimmiut teachers a challenge, even through the KSB-McGill University Inuit teacher training program, which allows teachers to earn their degree part-time while they work.

“Our teachers are parents — they’re busy,” said Eliana Manrique, the KSB’s assistant director of training and development. “It takes an average of nine years to complete the program.”

There are currently more than 100 KSB teachers in training and 95 per cent of them are women.

And their biggest challenge, Manrique realized, were the three trips a year that are required under the program, where teachers travel to another community for face-to-face instruction.

That’s a long time to leave a husband and young children behind, Manrique acknowledged, and it’s proven to be a barrier to students graduating.

That’s why the KSB recently launched an online module for its student teachers, which only requires them to leave home for one week a year.

“One of the problems we have in the North is isolation, so we need to break that,” Manrique said. “We need them to come together at least once as a group to exchange their experiences.”

In February, a first batch of student teachers gathered at the KSB offices in Kuujjuaq to try out the new program.

Using the software platform Moodle, teachers open their modules to find the avatars of Nunavimmiut instructors Mary Aitchison and Suzie Koneak awaiting them. “Welcome, we’re your instructors for your upcoming course,” reads the introductory message.

The platform, used in most Canadian universities, allows students to interact with their instructors and fellow students, as well as share documents — all adapted to the bandwidth in the North.

About a third of the online classes are “live” with the instructor present; students follow the rest of the curriculum on their own time.

While the platform is standard and developed with help from a consultant from McGill University, the KSB added a personal touch to the Inuktitut-language program. This module’s layout was designed by Ivujivik graphic designer Thomassie Mangiok, and narrated by Nunavik singer Beatrice Deer.

“When you come to your course and you see that your instructor is Inuk, it is very powerful,” Manrique said. “This has created capacity.”

Back in Inukjuak, Metuq is finishing her bachelor through the KSB-McGill program; not only that, but she’s helping teach a math course to fellow teachers-in-training.

It’s a slow process, but Metuq says the online component gives her the freedom to work at her own pace to complete the nine credits she has left to earn.

“It’s a lot more independent,” said Metuq, who teaches Grade 2 in Inuktitut at Inukjuak’s Innalik school when she’s not studying and caring for her four children. “This online portion feels a lot easier — we can do it in our own community, on our own time.”

For Metuq, that’s usually Friday afternoons after class lets out. She reserves an hour to focus on her studies in a quiet place, before the weekend starts.

As part of the new online component, the KSB has purchased a computer for every school in the region, for the teacher trainers to use. In Inukjuak, there are four teachers, including Metuq, doing their training.

At the rate she’s going, Metuq plans to finish her degree in early 2015.

She hopes that online training will help her reach her goal faster, but Manrique warns student teachers to be realistic.

“The program means teachers will be accompanied for a longer time, and we can expect that there’ll be more technology integrated into the classroom,” she said. “But this new model isn’t easier, and teachers still need to invest the time.”

Manrique, who recently began a masters in distance education to understand more about the programs she’s helping put in place, emphasizes that this is just a start.

“It’s an effort to respond to a need, but we don’t know where this will take us,” she said.

It likely means that more Inuit will go into teacher training, Manrique said, but she senses students are still more interested in quality over quantity.

“If they feel equipped and supported, they will stay,” she said.