Kelly Fraser: a new Nunavut diamond gets ready to glitter 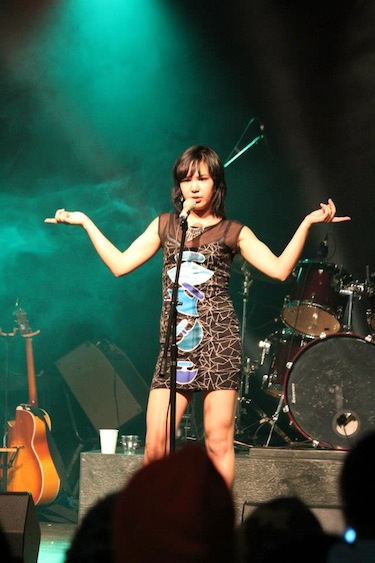 There’s a shining new star from Sanikiluaq, and she’s ready to take the world by storm.

Her name is Kelly Fraser, a 19 year-old musician and recent graduate of Nunavut Sivuniksavut, the Ottawa-based college for Nunavut Inuit.

This past January she posted a YouTube video titled “Diamonds In Inuktitut Taimantitut,” which has been watched by nearly 60,000 people — about twice the population of Nunavut.

The song is an Inuktitut cover of “Diamonds,” the global hit the Barbadian pop superstar Rihanna released in September 2012.

First inspired by NS music teacher Martha Kyak, classmates Kalene Gibbons and Charlotte Qamaniq helped make the video, which features Fraser singing in spots around Ottawa and is a clever riff on the Rihanna video.

For example, where Rihanna has wild horses running in the wind, Fraser found a clip from a nature website that shows a dancing polar bear.

“As soon as I put that song out on YouTube, like, 1,000 people saw it in one day, and everyone kept watching it,” said Fraser. “I was very shocked.”

This summer and fall, Fraser, along with her Sanikiluaq-based band “Kelly Fraser and the Easy Four,” will be playing a series of concerts across Nunavik and Nunavut, beginning with a performance later this month at Alianait festival in Iqaluit.

The tour is a chance for Fraser to bring to the live stage music that many people know only from YouTube.

And here’s how you know you are a YouTube star, when your video becomes so popular that other people make their own videos impersonating it.

“I even saw a young girl from Akulivik who made a video of herself lip-synching to my song,” said Fraser. “It was adorable.”

Fraser herself started with music at a young age. At age six she formed a dance group with her cousin, Eva Arragutainaq, and at age 10 she began playing guitar.

“I was bullied a lot because I had boy-short hair in elementary school,” said Fraser. “That boosted me to be a good guitar player.”

The first song Fraser wrote was about being bored in school. She sang it in a talent show to a very-approving audience.

At age 15, George Ettuk Arragutainaq, a guitar, accordion and fiddle player in his mid-40s asked her to join a band and “Kelly Fraser and the Easy Four” was born.

Charlie Kudluarok, 20, plays the drums and bass and also does back-up vocals.

“She’s a really good singer and plays bass,” said Fraser. “She loves to follow us and she loves to sing so we let her.”

Fraser describes her band’s music as rock, influenced by pop, folk and country.

Her inspirations include the late Nunavik singer and songwriter, Charlie Adams, and Johnny Cash, the legendary country singer famous for his deep distinctive voice and prison concerts.

Other Inuit influences include groups like “Northern Haze,” a metal band from Igloolik and “Sikumiut,” a 1970s Puvirnituq band.

Fraser says one of her greatest inspirations of all is Bruno Mars, a 27 year-old singer from Hawaii. “Like me he is from a small island,” said Fraser. “But that doesn’t mean we can’t be rock stars.”

Fraser made an Inuktitut version of the Bruno Mars song, “When I Was Your Man.”

For her Inuktitut covers, Fraser did not get permission. There’s a common misconception that the practice of parodying or remixing other songs on YouTube is illegal, but according to copyright laws in most countries the practice is usually perfectly legitimate.

“The strength of the YouTube community lies in its creativity,” reads an entry on YouTube’s blog. “Often this takes the form of memorable original content…this creativity also lies in the community’s ability to produce parodies, mashups, and remixes of well-known original content.”

Still, her departure from traditional Inuit music has gained Fraser some critics.

“I feel sooo dis-respected by our traditional clothes being used like that,” wrote a commenter named Matthew Munick in response to her NS class’s Inuktitut version of “Gangnam Style,” a video by a South Korean singer named Psy.

“Gangnam Style”, which features Psy dancing and grooving in sites across South Korea dressed in an ever-changing array of stylish and ridiculous outfits, has become a worldwide sensation and received more than a billion and a half YouTube views.

The NS version of the song features students in amautiit and other traditional Inuit clothes dancing and grooving in sites across Ottawa and has received nearly 80,000 views. It was intended to promote NS’s program in Inuit language.

But Fraser shrugs off the criticism.

“Our intention was to make our language stronger and just make a fun song,” she said. “I understand that people might feel the songs disrespected our culture, but if we don’t do anything about our culture, if we don’t promote it, then were going to lose it.”

And like Tagaq, Fraser has now become something of a northern celebrity.

“I can honestly say I have signed thousands of autographs,” said Fraser. “On cheeks and jackets and iPods, and in Inukjuak I signed a bass guitar.”

What advice does Fraser have for young fans looking to become musicians themselves?

After their show at Alianait in Iqaluit on June 28 the band will play the Kangiqsualujjuaq Festival on July 1, the Igloolik Rockin’ Walrus Festival on July 5, a show in Cape Dorset, the Aqpik Jam in Kujjuaq, the Akulivik Festival and the Umiujaq Blueberry Festival.

Fraser said the band has been practicing very hard and that she is extremely excited about their upcoming shows and the future in general.

“Just letting people know i kelly fraser and the easy four band are going to Iqaluit Alianait festival,” wrote Fraser, in a recent post on her Facebook page. “On our way to every inuit community in canada and greenland, alaska, Russia and to every place in the world. Have a great night all!”