“Kyoto is the past” 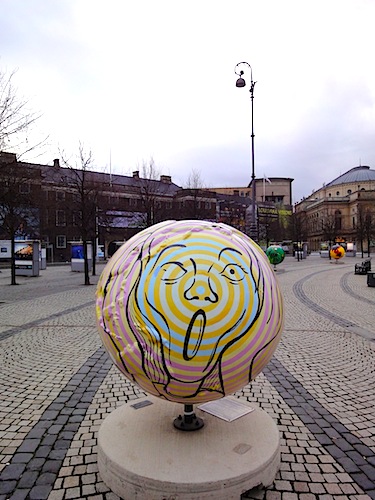 This globe was set up during the 2010 United Nations climate change conference in Copenhagen as part of a display on climate change. Canada, Japan and Russia have all told the international community earlier this year that they will not make new commitments under the Kyoto agreement after the end of 2012. The Kyoto agreement, an update to the UN Convention on Climate Change, is the only legally-binding treaty in the world that requires countries to reduce greenhouse gas emissions that trap heat in the atmosphere. (FILE PHOTO)

OTTAWA — Environment Minister Peter Kent skated around questions about Canada’s potential pullout from the Kyoto Protocol Monday, dismissing concerns that the country’s credibility was at stake in a new round of international climate-change negotiations underway in South Africa.

Kent said his international counterparts have been respectful in bilateral meetings of the Canadian government’s view that the climate-change treaty must be replaced with a more comprehensive agreement that builds on progress from the last two United Nations annual summits, in Cancun and Copenhagen.

“I’ve said any number of times in Parliament, Kyoto is the past,” Kent said Monday at a news conference. “Copenhagen and Cancun are the future.”

Kent has said that formally pulling out of the treaty is “an option” for Canada, but when questioned repeatedly by reporters, he declined to confirm or deny a CTV News report that Prime Minister Stephen Harper’s cabinet has already decided to withdraw from the agreement after the Durban conference. He said he preferred to answer questions about an announcement that the government was renewing funding over the next five years to support negotiations with the U.S. and scientific research to reduce pollution.

“This isn’t the day,” Kent said. “This is not the time to make an announcement (about Kyoto) beyond the announcement on the clean air regulatory agenda.”

Canada, Japan and Russia have all told the international community earlier this year that they will not make new commitments under the Kyoto agreement after its first commitment period expires at the end of 2012. The Kyoto agreement, an update to the United Nations Convention on Climate Change, is the only legally-binding treaty in the world that requires countries to reduce greenhouse gas emissions that trap heat in the atmosphere.

Nearly three dozen countries, including Canada, Japan and Russia, took on targets in the first phase of the agreement, which is based on a principle in the convention that developed countries are responsible for causing climate change and must act first to address the problem.

Prime Minister Stephen Harper and several members of his cabinet and caucus have previously questioned the scientific evidence linking human activity to global warming, describing the Kyoto Protocol as a “socialist scheme.”

But Kent said Canada’s anti-Kyoto stance was a key to a larger global agreement that requires the biggest annual sources of greenhouse gas emissions, such as the United States and China, to also take on targets that would stabilize emissions in the atmosphere and help the world avoid warming of more than two degrees Celsius above pre-industrial average temperatures — considered to be a dangerous threshold that could cause irreversible damage to the planet’s ecosystems.

Environmental groups from around the world immediately slammed Kent’s message, calling Canada the worst country at the Durban conference and awarding it first and second place in its infamous “fossil of the day” awards.

“This is a tough one for fossil because it is hard to joke about,” said Climate Action Network, a coalition of environmental groups. “Canada is here in Durban in bad faith. Countries should be asking themselves why Canada is sitting at the Kyoto negotiating table with a secret plan to formally withdraw from the protocol mere weeks after the talks end.”

Meantime, Kent said that Harper’s government was still moving forward with plans to ask each sector of the Canadian economy to help Canada meet a new target set by the federal government to reduce annual greenhouse gas emissions by 17 per cent below 2005 levels by 2020.

Kent had pledged to deliver a plan this year to regulate emissions from the oilsands, an industry that is expected to see its pollution rise exponentially over the next 10 years. But as was the case with his predecessors, he said the government is still doing “consultations” on the issue.

“We’re balancing the need to address our obligations under Copenhagen and Cancun, but at the same time, we’re also very aware that we’re not going to strand capital, we’re not going to threaten jobs in any of the sectors,” Kent said. “But we expect a collaborative effort from all of the emitting sectors, from the provinces, the territories our partners, the stakeholders to work to bring those emissions down.”

Kent is scheduled to leave in the coming days to lead Canada’s negotiating team at the Durban talks, which wrap up next week.