Kitikmeot youth take test drive on the road to jobs

“It showed me you can do it” 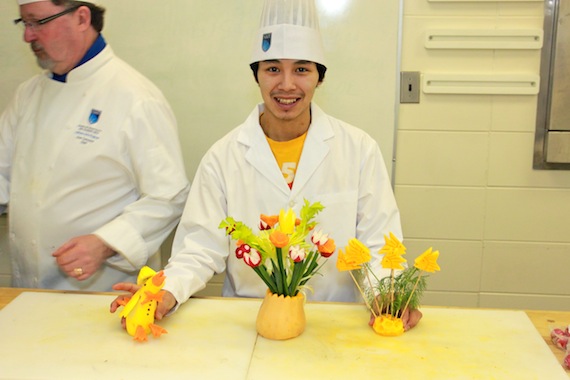 Peter Qayutinuak of Taloyoak displays some of the fruit and vegetable creations that he and other Kitikmeot youth made during their recent visit to the North Alberta Institute of Technology in Edmonton. (PHOTO BY ANGULALIK PEDERSEN) 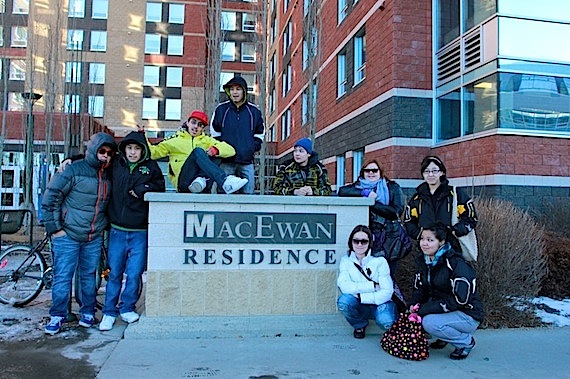 During their recent visit to post-secondary institutions in Edmonton, Kitikmeot youth visited Grant MacEwan University and its student residence. (PHOTO BY ANGULALIK PEDERSEN) 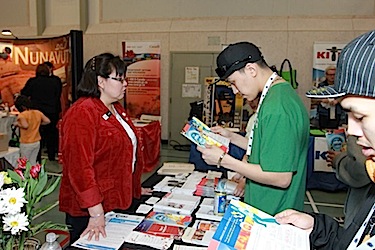 Kitikmeot youth who visited universities and colleges in Edmonton earlier this month also got a look at the various work opportunities at the Kitikmeot trade show, held Feb. 13 to 17 in Cambridge Bay. (PHOTO BY ANGULALIK PEDERSEN)

Learning to use carved fruits and vegetables to make an edible duck: that’s a skill Jen Angohiatok acquired when she recently visited the culinary arts program at the Northern Alberta Institute of Technology in Alberta.

Angohiatok, 17, a recent graduate of Cambridge Bay’s Kiilinik High School, wants to become a mechanic, not a chef.

But a visit to the sprawling kitchen facilities at NAIT was among the activities organized for Angohiatok and a group of Kitikmeot high school students and recent graduates during their visit to the city’s many post-secondary educational institutions.

The other participants from the Kitikmeot region included Matthew Ohokannoak of Cambridge Bay, Billy McWilliam and Kelvin Taipana of Kugluktuk Peter Qayutinuak and Pauline Pauloosie of Taloyoak, Ethel Ann Dwyer and Robert Hunter of Gjoa Haven, Rosemary Apsauktaun and Henry Qagutaq of Kugaaruk, with Sarah Jancke, a program co-ordinator for women and youth at the KIA, and Angulalik Pedersen of Kugluktuk as chaperones.

During the trip, sponsored by the Kitikmeot Inuit Association from Feb. 6 to Feb. 11, Angohiatok and the other participants, aged 15 to 21, visited NAIT, Grant MacEwan University and the University of Alberta and its aboriginal students centre.

The visit to NAIT helped Angohiatok feel more at ease with her decision to study “recreational powersports mechanics” there, so that some day she’ll be able to work repairing snowmobiles or all-terrain vehicles.

For McWilliam of Kugluktuk, the trip was an eye-opener because he’s planning to go to NAIT this summer to start studies in automotive mechanics.

The trip to Edmonton, McWilliam said, gave him a perspective on what awaits him there: large classrooms, many with state-of-the-art technical equipment, and lots of sports facilities.

German, thanks to funding from companies like NorTerra Inc., BHP Billiton Diamonds Inc., DeBeers Canada Mining Inc. and Diavik Diamond Mines Inc., as well the Government of Nunavut, is the northern students’ personal assistant in Edmonton, helping students from the Northwest Territories and Nunavut who go to Edmonton for education and job training.

German has offered to help McWilliam some help in finding a place to live in Edmonton.

Not surprisingly, many northern students come to refer to German, known to fetch students in the morning to get them to class, as “mom.”

But seeing touring colleges and universities in Edmonton was only one part of the KIA tour.

Participants also saw why it’s worth staying in school.

Jancke, a graduate of the Ottawa-based Nunavut Sivuniksavut program, who also accompanied the group to Edmonton, said high school students should start thinking about the future while they’re in Grade 11.

At the Kitikmeot trade show in Cambridge Bay Feb. 13 to Feb. 16, students received a “stay in school” message from KIA president Charlie Evalik, who received an honorary doctorate of laws last June from the University of Alberta.

The KIA offers student scholarships and bursaries, as do some of the regions’ active mining companies, such as MMG, Evalik told them.

And the students heard more about “economics of staying in school” — that is, why it’s worth continuing their education.

They heard that with advanced studies, you can get a job at the future Canadian High Arctic Research Station in Cambridge Bay, expected to bring 35 to 70 new jobs there by 2017.

That’s an opportunity that piqued the interest of both Angohiatok and McWilliam.

The students also visited the Kitikmeot trade show fair, with its many booths connected to mining companies and businesses that work in the region.

There, the students were given an “assignment” to talk to delegates and network at trade show events.

But before that, Angohiatok and the others got pointers on how to speak to future employers and practiced her speaking skills.

Even so, networking was tough for Angohiatok who says she’s “super-duper shy,” but she warmed up to talking to trade show delegates and even ended up with job offers.

For students who weren’t able to participate in the post-secondary tour or trade show visit, there’s another chance to see what’s available after high school because the KIA plans to offer the program again, Jancke said.