“Until this is studied and put in paper, we ask them to hold their decision” 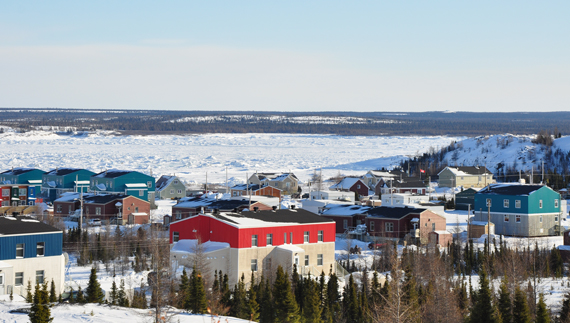 The KRG and Makivik have asked Hydro Québec to hold off on any rate increases until the public utility can evaluate electricity consumption across the region. (PHOTO BY SARAH ROGERS)

KUUJJUAQ — The Kativik Regional Government and Makivik Corp. are asking Hydro Québec to think twice about a proposal to hike electricity rates in Nunavik.

In August 2013, Hydro Québec proposed a province-wide hike of 3.4 per cent for its standard residential power rates.

But Hydro Québec uses a two-tiered system, with a secondary rate for any consumption over 30 kilowatts a day.

And the government-owned public utility proposed a second eight per cent rate hike for users in Nunavik who go over that daily usage.

“So we’re asking that Hydro does not increase without checking with those homeowners,” KRG regional council chair Maggie Emudluk said Feb. 24.

The KRG says it’s unfair to target Nunavik, since Nunavimmiut households, for a number of reasons, may consume more electricity than southern households.

Those include fewer hours of sunlight through the winter, colder winter temperatures and larger numbers of occupants in each home, she said.

For those reasons, the KRG and Makivik have asked Hydro Québec to hold off on any second portion increase until it can evaluate electricity consumption across the region.

“Until this is studied and put in paper, we ask them to hold their decision concerning the North,” Emudluk said.

But that study would only affect the tiny fraction of Nunavik’s population who are homeowners.

Because the vast majority of Nunavimmiut live in social housing, their electricity bills are paid by the province’s social housing provider, the Société d’habitation du Québec.

Currently, a second tier consumption rate of 32 cents per kilowatt hour is applied in Nunavik, compared to seven cents per kw/h in the rest of Quebec.

Hydro Québec’s goal in proposing the secondary eight per cent increase in Nunavik is to apply the hike until the residential rate matches the cost of producing that energy in Nunavik, which the public utility says is about 59 cents per kw/h.

But in a resolution passed by the KRG’s regional council Feb. 24, the KRG says Hydro-Québec should first explore ways to reduce the use of electricity in Nunavik, given the region has the highest cost of living and highest level of poverty in Quebec.

Gagné, who liaises with Hydro-Québec on behalf of the region, says the KRG is still waiting on a response from the public utility.

“We’re confident they’ll refuse (the rate hike),” he said. “And this will give people time and options to lower their energy consumption.”

But one KRG regional councillor fears that demands on electricity in the region will only go up.

“Our summers are starting to get hotter and we’re starting to look at air-conditioning,” said Aupaluk councillor David Angutinguak. “We have harder days coming in our future.”