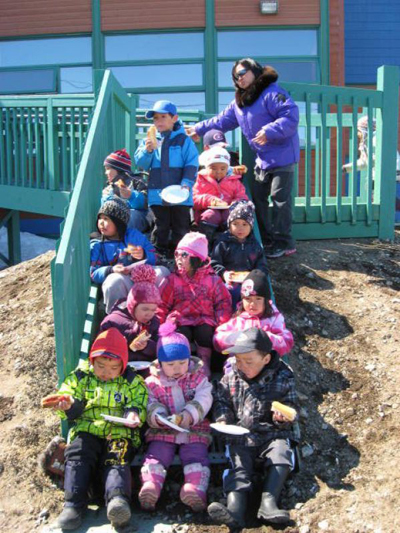 Children at the Kamattsiavik childcare centre in Quaqtaq enjoy a barbecue and picnic last summer. (PHOTO COURTESY OF NUNAVIKCHILDCCARE.CA)

KUUJJUAQ — The Kativik Regional Government says it’s working to keep childcare fees low in Nunavik, despite Quebec’s plan to hike those fees across the province in 2016.

Quebec’s Liberal government announced last week that Quebec families will begin to pay for childcare on a sliding scale, based on their annual household income.

Under Quebec’s subsidized system, parents currently pay $7.30 per child per day for daycare.

While that will stay in effect for families with a total income of less than $55,000, the fee will climb as high as $20 per day for households whose annual income in more than $150,000.

At KRGs’ council meeting this week in Kuujjuaq, councillors wanted to know what that meant for daycare fees in Nunavik.

The hike won’t be automatic in Nunavik, said Margaret Gauvin, director of the KRG’s sustainable employment department, which oversees the region’s 19 childcare centres.

That’s because the KRG receives block funding to operate its daycare, while centres elsewhere in Quebec are funded directly through the province.

“We’re not sure what’s going to happen,” Gauvin said. “We’re going to be negotiating with the government to try and keep the fees as is. We don’t have a yes on that, but we’ll be fighting for it.”

KRG management plans to meet with the Quebec government to discuss the issue early in 2015.

Cost is one issue, but KRG councillors also had concerns about the waiting list for daycare spaces in some communities.

The waiting list for child care spaces in Kuujjuaq has risen as high as 90 families this year, while the KRG waits on Quebec to fund a third centre in Nunavik’s largest community.

One way to provide more childcare in the region would be to open smaller, home-based daycare centres, which can each accommodate between seven and nine children.

In fact, the KRG has funding and permits to open 50 home care spaces, if it can find the right venues.

“Any time you open a daycare, you have to have a board of directors and staff have to do a criminal check,” she said.

“If there’s an interest people can contact us,” she said. “But people who have inquired before find it too much hassle.”