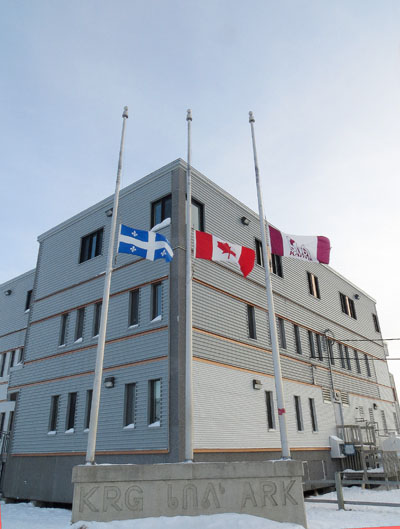 Flags from Quebec, Canada and the Kativik Regional Government were lowered to half-mast March 4 at the KRG office in Kuujjuaq in honour of Cst. Steve Dery of the Kativik Regional Police Force, who was shot and killed March 2 when he and another member of the KRG-run police force responded to a call about a domestic dispute. (SUBMITTED PHOTO) 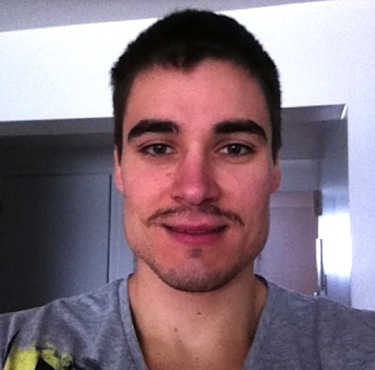 This photo shows Steve Dery, who was killed March 2 at the age of 27, with a mustache he was growing during “Movember,” when he and other KRPF officers grew mustaches to raise money and awareness for prostrate cancer. (HANDOUT PHOTO FROM CA.MOVEMBER.COM) 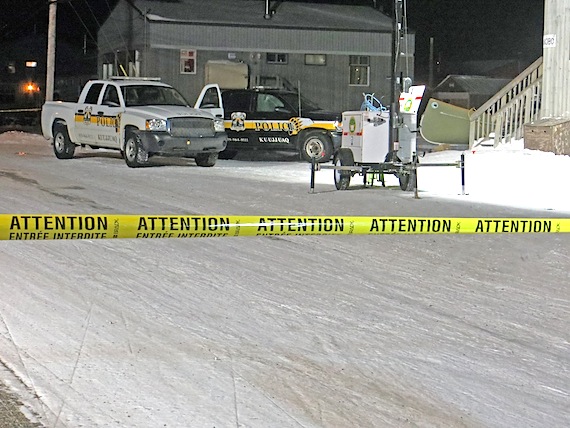 During the evening of March 3, trucks belonging to the Kativik Regional Police Force remain parked behind the large perimeter set up by volunteer firefighters around House 1080 on Chopper Crescent in Kuujjuaq, where a violent confrontation between an armed man and police unfolded over the evening of March 2 until about 3 p.m. on March 3. (SUBMITTED PHOTO)

A member of the Kativik Regional Police Force, Steve Dery, 27, died March 2 in Kuujjuaq after he and Joshua Boreland, his partner in Nunavik’s police force, were shot at when they responded to a call involving domestic violence.

The armed standoff that followed ended just before 3 p.m. March 3 after a flare was fired into House 1080 on Chopper Crescent in which an armed man had barricaded himself.

That’s when members of the special tactical squad from Sûreté du Québec provincial police entered the house and found the dead body of young man who appeared to have died by suicide inside the same residence, a SQ spokesperson said.

Multiple sources in Kuujjuaq have identified the young man as Jobie Saunders Jr., who was in his early 20s.

A Quebec government statement, released late March 3, said an independent investigation into the Kuujjuaq incident will take place, under legislation that calls for such an inquiry when anyone dies or is injured in a police action.

“Steve had a really good sense of humour and he enjoyed life a lot,” said Dery’s cousin Hélène Sauvageau, who spoke to the Ottawa Citizen March 4 on behalf of his grieving family and girlfriend, a nurse at the Tulattavik Hospital in Kuujjuaq.

“He was brave man with a good heart and always with a smile,” she said. “He wanted to be a policeman to protect others.”

“My condolences to the friends and family of Steve Dery, the young police officer who lost his life in the line of duty in Kuujjuaq,” Prime Minister Stephen Harper said in a March 3 statement.

MPs in the House of Commons observed a moment of silence as a tribute to Dery on March 4.

Also on March 4, Nunavut Premier Eva Aariak rose in the territorial legislature “to share my deepest condolences on the tragic events that took place Saturday evening in Nunavik, our neighbours to the south.”

“My thoughts and prayers go out to the families, loved ones, and the community of Kuujjuaq during this difficult time,” she said.

The Ottawa Police Service has offered to help organize a police funeral for Dery this weekend.

The violence started when the two KRPF officers responded to a call at about 9:30 p.m. March 2, SQ Sgt. Ronald McInnis said.

“As soon as they arrived they were shot at,” he said.

The two officers were brought to the Tulattavik Hospital, where one, later identified as Dery, died of his wounds, he said.

The other officer, since identified as Boreland, suffered non-life-threatening injuries.

Sources in Kuujjuaq said during the lengthy standoff, the SQ team was on site responding to the standoff, which unfolded near the Kuujjuaq neighbourhood known as Heli-Quebec, behind the Pitakallak elementary school.

A woman who was inside the residence managed to leave.

People in the community of 2,400 have told Nunatsiaq News they feel “very, very sad” that the police officer, a well-liked young man, who had worked in Nunavik since 2009, died.

And they said they want more control of firearms and increased firearms safety promotion in Kuujjuaq, where firearms for hunting purposes can be found in many homes.

One Kuujjuaq man said that he thought this past weekend’s incident shows “a lot about how kids are raised and what they live each day,” referring to the high crime of rate and alcohol-related violence in Kuujjuaq, where there were a total of 2,434 criminal incidents in 2012, according to recently-tabled statistics from the KRPF.

These included 640 assaults, of which 424 were alcohol-related and 55 directed against members of the KRPF.

Another resident worried that negative attitudes towards the KRPF, criticized last week by some councillors at a Kativik Regional Government council meeting in Kuujjuaq, may contribute to more attacks against police in Nunavik.