“I’m happy they apologized, but they didn’t mention any of my ancestors in the apology” 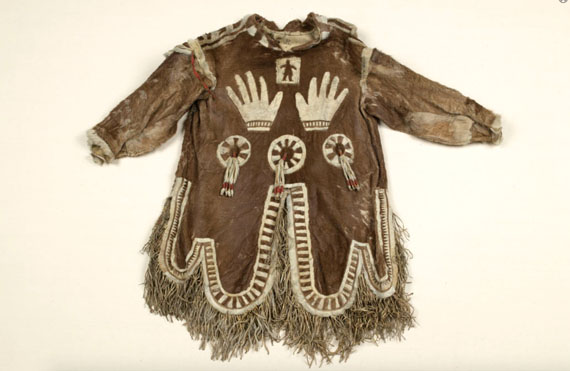 The famous parka made for Qingailisaq, also known as Oqaamineq, by his wife Ataguarjugusiq and sold to the American whaler George Comer in 1902. The original is still stored at the American Museum of Natural History in New York City. 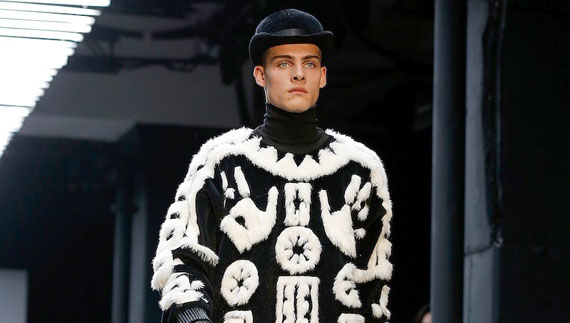 A model shows off a sweater that the KTZ company created earlier this year and offered for sale, based on a design appropriated from Qingailisaq’s parka. KTZ has since pulled the garment from its catalog. 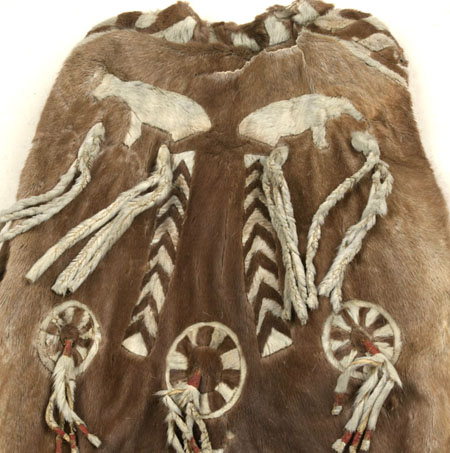 The back section of Qingailisaq’s parka.

The London-based fashion company KTZ, which sparked international attention — and outrage — for its imitation of a traditional Inuit shaman’s sacred parka, issued a formal apology following the removal of the controversial article from its product line Nov. 27.

But a descendant of the shaman says KTZ must do more to make reparations for the theft of her ancestor’s garment.

“I’m happy they apologized, but they didn’t mention any of my ancestors in the apology,” said Salome Awa, great-great-granddaughter of the shaman Qingailisaq, who owned the original garment.

Awa wants the fashion company to turn over any profits they made from the sale of the garment.

“I think it would be the right thing to do, if they acknowledge the fact of what they did was wrong and that they have stolen,” she told Nunatsiaq News.

“This wasn’t for me, this fight was for my ancestors, [for] shaman’s lives and what they did to help other people. Being copied and to be made money [off of] … from our design, from our family’s design, is not right.”

As for where that money goes, Awa says she doesn’t need it — but the family should still have a say.

Before KTZ pulled it from production, the sweater-imitation of Awa’s ancestral parka sold for roughly $900.

Awa acknowledged she received some negative comments regarding the affair through Facebook, which claimed she was overreacting.

But she is quick to dismiss anyone who alleges the recent media attention has been for publicity or a quick buck.

“Whatever negative comments are out there they have no clue what my fight was about,” said Awa, who is also a morning producer for CBC Nunavut in Iqaluit.

Twenty years in the media, she said, has prepared her for any criticism.

In the future, Awa would like to see international agreements banning the cultural appropriation for profit of things made by Indigenous peoples.

She admits, however, that to define exactly what constitutes “appropriation” will be difficult.

“It’s a grey area. It’s great that these designs tell a history of who we are, but they belong to someone, so its kind of hard.”

The incident, which attracted international media coverage, began in early November when Awa was given a link to KTZ’s website.

“I saw these Inuit designs, so I started scrolling down through the designs and I then I saw Qingailisaq’s sacred shaman [design] and I was in shock,” she said.

“It was eerie because you just cannot take that design and use it. It’s a taboo.”

The London-based fashion company has come under fire for its design choices before: most recently by an Indigenous clothing designer from Montana who claimed the company imitated a design without her permission.

In their apology letter to Awa, KTZ claimed their designs are meant as “homage” to Indigenous cultures.

“It’s part of KTZ’s DNA to celebrate multiculturalism as a form of art and to encourage appreciation for traditions, ethnicities and religions’ diversity,” read the apology.

Arctic historian Kenn Harper said the original shaman parka copied by KTZ was made by Ataguarjugusiq for her husband Qingailisaq, also known as Oqaamineq, in about 1902.

Qingailisaq later sold the parka to George Comer, an American whaler who collected artifacts on behalf of the American Museum of Natural History.

The parka remains to this day within the holdings of the museum in New York City.

The exact location of the parka was unknown to Awa before the recent controversy and public discussion.

She isn’t ruling out a visit to see her family’s heirloom sometime in the future.

“It would be great to see but I don’t know when that would happen.”