Kuujjuaq fire under control, but Nunavik community on high alert

“We’re going to pray for rain” 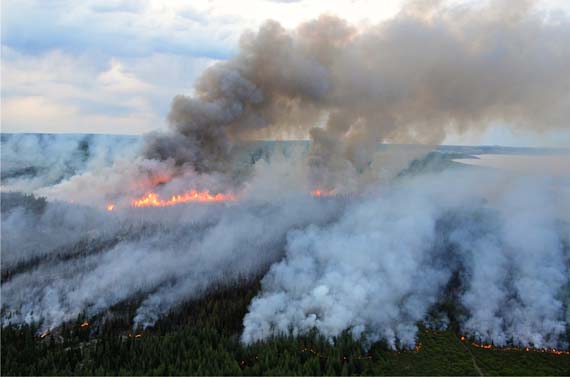 An aerial view of the fire outside of Kuujjuaq June 22. (PHOTO BY ISABELLE DUBOIS)

A forest fire that burned just a few kilometres outside of Kuujjuaq is now under control, although the community of 2,200 remains on high alert, says the town’s mayor, Tunu Napartuk.

A fire quickly spread June 22 through a wooded area seven kilometres southeast of the Nunavik community known as the Range, where many townspeople have built cabins.

Fire trucks were unable to reach the blaze, but heavy equipment operators dug a trench around the area that managed to contain the fire overnight.

In the morning, water bombers from southern Quebec flew over the fire.

“We’re a little more relaxed that we were over the last 48 hours,” Napartuk said June 24. “But the ground is very dry. Since the snow melted, we’ve hardly had any rain. If it stays like that, we’re concerned there will be other fires.”

Kuujjuaq is one of the few communities in Nunavik where trees grow, and the region has seen a number of hot days through the month of June, when the temperature has risen above 20C.

This forest fire came only weeks after a smaller fire started during a barbecue outside Kuujjuaq.

In a June 23 release, the Kativik Regional Government asked Kuujjuammiut to refrain from building any fires until further notice.

“We’ll be on high alert, and cautioning the community on how they start fires at their cabins,” Napartuk said. “They saw how powerful that fire was, so I think everyone is being really cautious now.”

Crews are still investigating how the fire might have started, but there have been no reports of any injuries, missing people or property damage as a result of the blaze.

The Range neighbourhood is home to a number of cabins and residences owned by some full-time residents, all of whom were evacuated once the fire started.

Napartuk said he recognizes the situation could have been much worse.

“We were very fortunate that the wind was shifting away from the area [on June 22], that’s one of the things that made a very big difference,” he said. “Because there was no way those [fire trucks] would get to where the fire was actually burning.”

But Napartuk gives the biggest credit to local fire fighters and other response crews, many of whom worked through Sunday night to ensure the fire was under control.

“I’m extremely impressed with the amount of work these guys did,” Napartuk said. “They worked continuously for 30 hours to keep the community safe.”