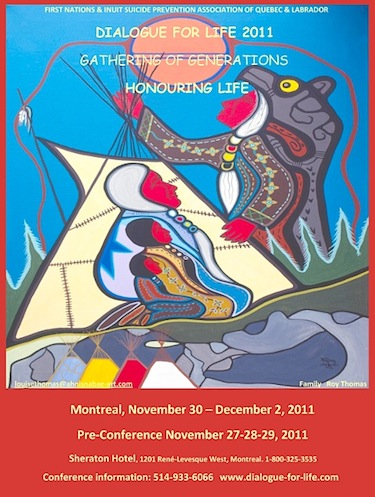 Hannah Tooktoo and Christina Savard will spend next week in Montreal attending suicide prevention workshops and sessions at the Dialogue for Life conference of the First Nations and Inuit Suicide Prevention Association of Quebec and Labrador, whose poster is shown here. 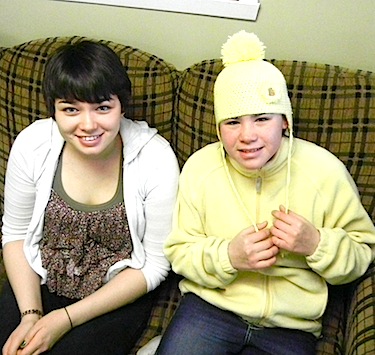 Hannah Tooktoo, 16, and Christina Savard, 17, students at Kuujjuaq’s Jaanimmarik School, want to help their prevent suicide and help their peers deal with the impact of suicide in the community. (PHOTO BY JANE GEORGE)

That’s why Hannah Tooktoo and Christina Savard plan to spend next week in Montreal attending suicide prevention workshops and sessions at the Dialogue for Life conference of the First Nations and Inuit Suicide Prevention Association of Quebec and Labrador.

The girls’ shared hope: to stop young people in Kuujjuaq from killing themselves and help others recover from the loss of their friends and family members to suicide.

That’s a big ticket for the two girls, who have already been hit hard by suicide.

Last spring two teenaged girls killed themselves in Kuujjuaq. They were childhood friends who Tooktoo and Savard saw daily in the hallways of Kuujjuaq’s Jaanimmarik School.

But Savard, 17, said suicide has taken “lots” of people who were close to her.

When asked how those deaths affect her, a shadow appears to fall across Savard’s sweet young face, below a cheerful yellow hat with a pom-pom on the top.

Savard says she feels left behind and hurt.

And she’s not alone.

“People are hurt,” her friends are sad, and they just try to make it through one long day at a time.

But it helps to talk with friends, says Savard, who plans to study nursing in Montreal when she graduates next year.

Tooktoo, 16, and the current “mayor” of Jaanimmarik School, wants to encourage young people to open up about suicide.

When she returns from the Montreal workshops and conference, Tooktoo hopes she will have more tools and more knowledge to get people talking.

Until now, she’s mostly been on the listening side, caring for friends who are on “suicide watch” and can’t be left alone.

“If you just listen they feel better,” Tooktoo says.

“I think if people talk about it more,” some will think twice before they decide to end their lives, she says.

“Devastating” is how Tooktoo calls the loss of her friends to suicide.

She and Savard are wise beyond their years: they come up with several reasons to explain why some of their peers decided that life isn’t worth living — troubles at home, poor parenting, inter-generational trauma from residential school experiences and drugs.

They say many turn to drugs to lessen pain, but end up suffering more because they end up feeling more alone.

If you or a friend are in crisis and need someone to listen right now please call this numbers for immediate assistance: Kids Help Phone: 1-800-668-6868 (24hrs).

Online, you can also find information and other links to help at the National Aboriginal Health Organization’s honouring life website.