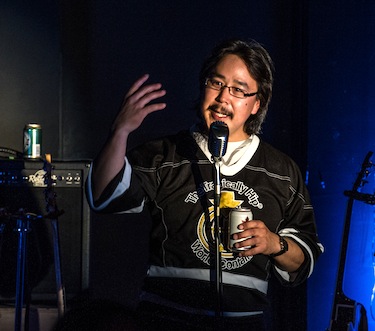 Vinnie Karetak, a funny guy in his own right, hosts the June 14 Mahahaa Comedy Jam in Iqaluit. (PHOTO BY ED MARUYAMA) 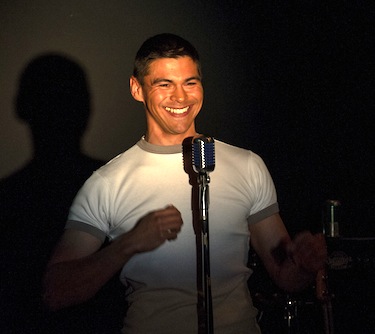 Franco Buscemi flashes a smile June 14 as the audience reacts to one of his jokes. (PHOTO BY ED MARUYAMA) 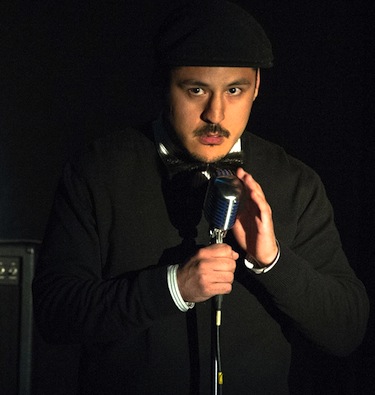 If you laughed during the Mahahaa Comedy Jam last weekend, chances are you’ve lived in Iqaluit for awhile – a prerequisite to getting some of the jokes.

The June 14 jam, named after the Inuit mythical creature that tickles you to death, was hosted by Vinnie Karetak and starred Iqaluit residents Franco Buscemi, Nanauq Kusugak and Nastania Mullin, with a performance by the popular Iqaluit band, the Trade-offs.

“It worked out that we all had a different style,” Buscemi said.

The idea for a comedy night came about after Kusugak performed a stand-up routine for the first time at a Rotary Club event earlier this year.

Buscemi asked him about doing another performance and recruiting more local comedians.

The two agreed Iqaluit would enjoy the occasional comedy show — a break from the usual night life entertainment.

Buscemi, who has performed comedy before at events, including a Yuk-Yuks open-mic night, said there was a lot of good feedback from people who went to Mahahaa’s first show at the Francophone Centre, which was at-capacity.

“There was a lot of feedback from people who were there, and on Twitter,” Buscemi said.

“Some of it was pretty racy,” he added, referring to the jokes, which were told in English.

But to really get the jokes, you have to be an Iqaluit resident.

“It was local humour, that you can only get if you live here, that was the most unique feature of the show, being able to joke about our roads, our dogs… the dynamic of living in a small town and knowing everyone,” he said.

Among the jokes Buscemi has told before: that Iqaluit’s high number of loose dogs could be strapped to explosives as a way of dog control — a suggestion that received a good laugh from the audience.

At the same time, any time jokes introduce something that’s new or different, people are also interested, Buscemi said.

That can mean more chances to laugh together in the future.

“It’s a nice change to the routine. It’s nice to do something out of the ordinary, so maybe an occasional comedy show is what we need,” he said.

Though Buscemi said he won’t be perform again, as he eyes a jump into politics, he is confident the comedy show will continue.

But in the meantime, people can reflect on the group’s first show.

“They’ll [videos of the first show] make their way to Youtube… don’t be offended,” he said of some of the jokes, which made fun of parents, relationships, sex, and travelling.

“It was way, way smoother, I felt pretty at home,” he said of his 15 minute set.

With the spotlight shining on him, he couldn’t see the audience anyway, Kusugak said.

He’s always been interested in comedy, and sometimes uses Twitter as a springboard for ideas while he builds material for new shows.

Overall, the audience were happy to see stand-up comedy and spend an evening laughing, Kusugak said, and — “that’s pretty promising.”