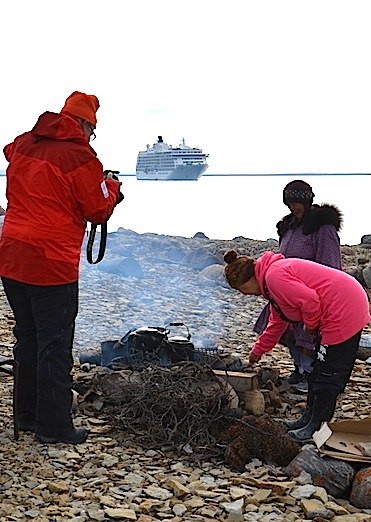 As a passenger from The World takes photos, Eva Otokiak and Mary Avalak tend to a fire Aug. 30 with The World in the background. (PHOTO BY PAUL BILLOWES/ KITIKMEOT HERITAGE SOCIETY)

Six cruise ships planned to make more than two dozen stops at 10 Nunavut communities during August and September, fewer than in 2011.

But this year brought the largest number of cruise ship passengers, with The World carrying 508 passengers and crew members into Nunavut.

After becoming the largest passenger vessel to transit the Northwest Passage from west to east, The World is scheduled to stop in Pond Inlet Sept. 5 — its second call at a Nunavut community.

The ship, which bills itself as “the largest privately owned residential yacht on earth,” also stopped in Cambridge Bay Aug. 30.

And if you ask Vicki Aitaok, the local cruise ship coordinator, how that visit went, she’ll tell you that the presence of a big ship — even a luxury one — didn’t mean more money flowed into the community.

Aboard The World were roughly 200 passengers, about two times times more than have visited the community on any previous ship.

“There were more people, but less money,” Aitaok said.

That she attributes to the general slow-down in the global economy, which means people — even wealthy ones who cruise the world — are cutting expenses.

Instead they opted for less costly events, such as a visit to the half-sunken hulk of the Maud (which won’t remain offshore the community in 2013 if plans to take polar explorer Roald Amundsen’s ship back to Norway go off without a hitch).

Although The World is a world of luxury, a place whose residences cost millions and where passengers pay $36,000 a year for food in addition to hefty homeownership fees each month, few local stores made money during the ship’s visit to Cambridge Bay.

And an optional, pay-as-you-go tour to scenic Mt. Pelly outside Cambridge Bay was cancelled due to lack of interest.

Those passengers who did get off The World — and not all of them did — chose free activities such as golfing, or a tour of Kitikmeot Foods, or simply took in the presentations organized for them at the Gravel Pit, a traditional summer cabin spot close to where The World anchored offshore.

The tour company in charge of The World’s schedule in Cambridge Bay had suggested Aitaok organize interactive experiences for the ship’s passengers.

So, Aitaok, along with the Kitikmeot Heritage Society, set up activities, which included displays of fish preparation and tea boiling.

But most passengers appeared content to simply snap and shoot photos of the activities rather than pitch in, while some were squeamish about eating the Arctic char chowder prepared for them.

In the future, the challenge will be to provide a cultural experience for cruise ship visitors that meets their expectations and, at the same time, benefits the community, Aitaok said.

What many crave is a “destination” during their visit, she said.

The visits by cruise ships to Cambridge Bay in 2012 “really opened my eyes this year,” said Aitaok, who has organized on-shore visits for cruise ships for several years.

As ice conditions improve in the Northwest Passage, Cambridge Bay is likely to receive visits from even larger ships, such as the 3,780-passenger Costa Pacifica, which has visited Arctic Norway and Greenland.

On Sept. 3, Cambridge Bay welcomed its last cruise ship of the season — the Clipper Adventurer.