Conference this week in Ottawa brings together community development research

A Resources and Sustainable Development in the Arctic or ReSDA meeting in Iqaluit in October 2013. (PHOTO COURTESY RESDA) 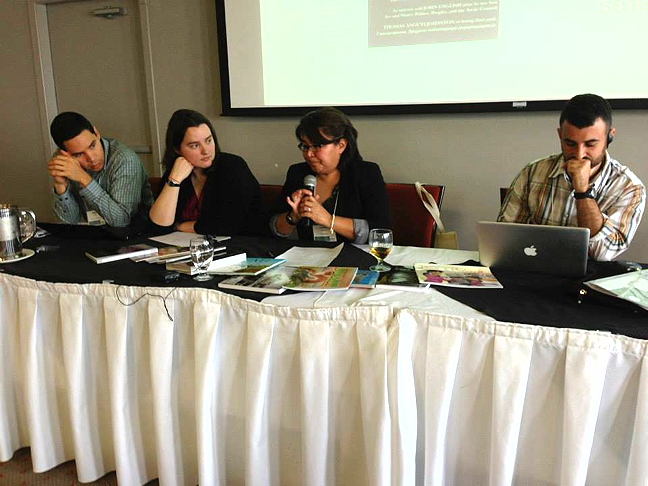 OTTAWA—Mining in Nunavut might have slowed down a bit, but what better time to talk about how communities can maximize resource deal benefits and minimize the impacts on themselves and their communities when those companies start sniffing around again.

So says a network of researchers who work with communities across Canada’s North.

Members of Resources and Sustainable Development in the Arctic, or ReSDA, are meeting in Ottawa this week to discuss how community empowerment can influence the nature of resource development with the hope of influencing federal policy makers.

“We’re now in a situation, at least in the territories, where communities can say now. They have the power to make a decision,” said Chris Southcott, scientific director of ReSDA.

“But they also need information… We can look at the social and economic and cultural aspects and say okay, this is some information that can help you understand what’s the best possible situation you can have and, based on that information, you can make a decision on whether to go ahead.”

Southcott, a sociologist with expertise in community development and based at Lakehead University in Thunder Bay, Ont., was born in Labrador, raised in northern Ontario and has worked for years in the Yukon.

He knows a bit about extractive industries and their impacts on small communities, both Indigenous and not.

Members of ReSDA, funded through a federal grant that runs from 2011 to 2018, hold annual northern workshops with the goal of directing research on community resource development to ensure it reflects what people in the North actually want.

Southcott said those workshops, held at different times in Iqaluit, Kuujjuaq and other northern locations, have evolved from first determining what kinds of questions local people had about development to undertaking studies to answer those questions and then figuring out how to share that information.

Those workshops—five so far—have brought together academics, land claim organization representatives, harvesters, community members and research institutes in an effort to form an alliance of knowledge and toolkits for northern communities.

ReSDA contributors hope that the academic reports, which are now starting to emerge, and their plain language summaries—which ReSDA says will be translated into Inuktitut and other Aboriginal languages—should help communities negotiate better deals when they’re sitting across the table with mining executives.

You can find some of those reports now on their website under the link “knowledge sharing.”

They even have a YouTube channel you can access here where you can watch some of the workshop presentations including filmmaker Zacharias Kunuk talking in Iqaluit in 2013 about the power of film to communicate information.

The Ottawa workshop this week, which runs from Oct. 26 to Oct. 28, is the first to take place outside the North and there’s a reason for that.

Southcott and organizers have invited a host of federal staffers including from Indigenous and Northern Affairs, Natural Resources Canada, and the Canadian Northern Economic Development Agency or CanNor so they can bend their ears about community best practices when it comes to northern development.

Topics to be covered over the three-day conference include how to sustain culture, well-being and community health while also maximizing benefits from development.

Canadian and international scholars will present on a host of topics and will include examples of successes and failures in Nunavut, Nunavik and elsewhere.

Southcott said that since Thomas Berger’s report on the MacKenzie Valley pipeline inquiry in the 1970s—which recommended a moratorium on development until land claims were settled and community capacity increased—some social scientists have had a bias against development.

But it’s clear that northern communities want to, and should be entitled to, develop a resource economy just as southern communities have for decades. Northerners, however, have other priorities as well such as sustainable harvesting and community health.

There are ways to learn from past mistakes, Southcott said, and maximize the best deals possible. Communities just need to know what to ask for and how.

“What’s really healthy is that the debate is going on in Nunavut and the people of Nunavut will decide and that’s a great step forward,” he said. “It doesn’t exist everywhere in Canada.”