“It was very hard to keep it a secret” 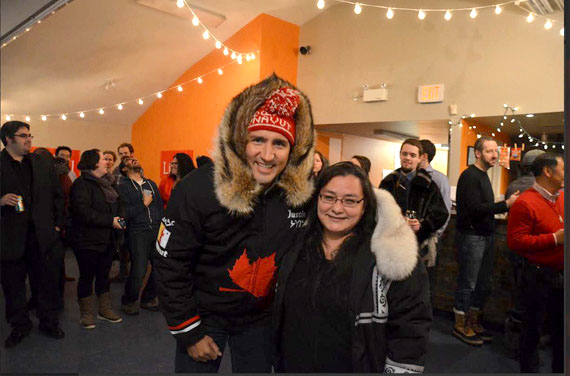 Iqaluit seamstress Marlene Watson finally got a chance to meet Liberal leader Justin Trudeau Jan. 12 so she could see him wear her handmade parka. (PHOTO BY AARON WATSON) 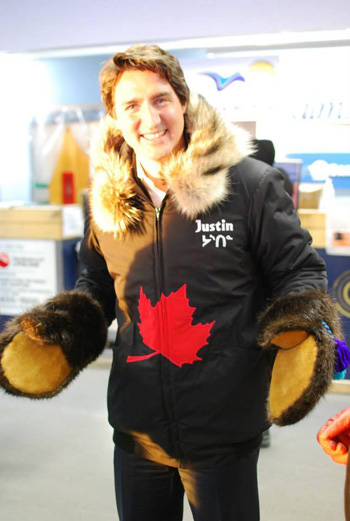 Noel Kaludjak snapped this photo of Justin Trudeau in his new parka at the Rankin Inlet airport Jan. 12 while the Liberal leader was passing through from Yellowknife to Iqaluit. (PHOTO BY NOEL KALUDJAK)

What’s one of the best ways of promoting Inuit culture?

Try dressing a high-profile politician in a handmade parka.

Ask Marlene Watson, an Iqaluit civil servant and part-time seamstress, who was approached by the Liberal Party of Canada last fall to make a custom parka for leader Justin Trudeau ahead of his northern tour, which brought him to Iqaluit this week.

She started the project without knowing who the parka was for — not until recently, anyway — when she was asked to stitch the name “Justin” onto the breast of the parka in English and Inuktitut.

The parka is a fitted black jacket, typical of the style of parka made in Coral Harbour, the community where Watson grew up.

A bright red maple leaf runs across the front, with red and white stripes around the cuffs, and a Nunavut flag, hand stitched by Watson herself, on the arm.

The parka’s hood is lined with coyote fur — not sourced in Nunavut, but purchased on a local sell and swap Facebook page.

Watson also crocheted a Pang hat for Trudeau to go with his new parka.

“It was very hard to keep it a secret,” said Watson, whose parkas are in high demand by family and friends. “I wanted to tell all my friends.”

But she didn’t, and most Nunavummiut first heard of it when photos of a parka-clad Trudeau began popping up on social media Jan. 12.

Watson finally got a chance to introduce herself to Trudeau as the parka’s maker during a Jan. 12 event at Iqaluit’s Francophone centre.

It was a relief to see that the parka fit, she said. Apart from getting Trudeau’s measurements, he’d never before had a chance to try it on.

“He was really excited and quite proud of it,” Watson said. “And I was so excited — I’ve never made something for someone so well-known.”

Watson started sewing as a teen in her hometown of Coral Harbour. She said she was motivated by a cold winter — her jacket at the time wasn’t warm enough, she said — and also by her mother, a skilled seamstress who ran her own sewing business.

Since then, Watson has designed and stitched dozens items for her family and friends, including hats, parkas, pants and amautiks.

Watson says she gets a lot of custom requests that she tries to fill in her spare time. More have already started coming in as people see her latest creation.

But she already has her next project lined up: a Pokemon-themed parka for her nine-year-old daughter.

Watson hopes Trudeau’s parka gets some mileage though; she’s proud to think that her work is being seen across the country.

But the experience hasn’t swayed her politically, Watson said.

“I still have no idea who I’ll vote for,” she laughed.