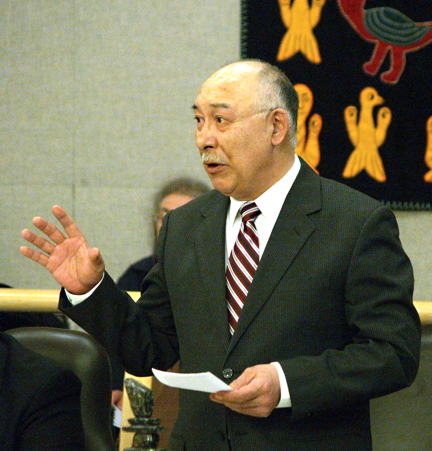 James Arvaluk, in the Nunavut legislature, before he resigned as Tununiq MLA. (FILE PHOTO) 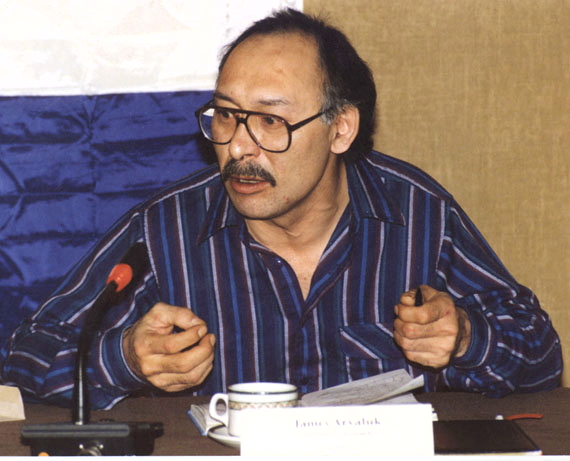 James Arvaluk, in 1994, as a member of the Northwest Territories legislature. (FILE PHOTO)

The people of North Baffin are today mourning the death of James Arvaluk, long-time territorial politician and national Inuit leader.

Arvaluk, who resigned as Tununiq MLA in May 2011 due to failing health, passed away April 27 at a hospital in Winnipeg. He was 68.

“I have said this more often than once that as MLA for the Tununiq riding, it would be my great honour to do half of what he did for our community, and for Nunavummiut,” said Tununiq MLA Joe Enook, reached at his constituency office in Pond Inlet April 28.

Enook, who replaced Arvaluk in a by-election after Arvaluk’s resignation, said he heard the news of Arvaluk’s passing just before midnight April 27.

“In my opinion, he was a very humble man,” Enook said. “In my dealing with him, it was never about ‘me,’ it was about the cause.”

Premier Peter Taptuna extended his condolences to Arvaluk’s family in a statement April 28.

“Mr. Arvaluk was a tireless advocate during the Nunavut land claims process, and was involved in the formation of what is now Inuit Tapiriit Kanatami,” Taptuna said.

“During this difficult time, we remember and appreciate his contributions to the development and progress of our territory.”

A career politician, Arvaluk was a controversial figure in modern Nunavut history.

Arvaluk was elected president in 1974 of Inuit Tapirisat of Canada, which later changed its name to Inuit Tapiriit Kanatami.

Over the winter of 1979-80, he ran as a Liberal candidate for the federal riding of Nunatsiaq, but lost to the NDP’s Peter Ittinuar.

He re-entered pre-Nunavut territorial politics in 1991 as part of the Northwest Territories legislature and became education minister.

After that, Arvaluk suffered a series of debilitating criminal charges and brushes with the law including two Yellowknife sexual assaults for which he was found guilty in 1995 — one of which was overturned on appeal.

He served two-and-a-half years in jail for that and was then elected to Nunavut’s first legislative assembly in 1999, representing what was then Nanulik constituency, and took on the role of education minister.

In August 2000, he was charged again, this time with assaulting his girlfriend. He served another nine months in jail for that.

Despite that checkered past, voters in Pond Inlet stuck by him, voting Arvaluk into Nunavut’s Tununiq constituency in a 2006 by-election and again in the 2008 general election.

Enook said Arvaluk’s past is well-known and documented, but what is lesser known are the things Arvaluk did behind-the-scenes, for his constituents and for Inuit in general.

“He went through some rough times, but at the end of it all, I think he did what he wanted to do, which is to represent Inuit,” Enook said.

“I was reflecting on this last night: I wonder how many of us would have had the strength, the courage, to get up from your hands and knees, after being in the gutter, and stand up and say, yes, I will do my best to represent you once again, I will do what I can for the community, after having fallen down.

“It takes a special and a courageous man to do that, and to do it more than once.”

Enook said Arvaluk also enjoyed being on the land, and that, “he absolutely loved hunting.”

He also called Arvaluk “Mr. Fix-it-all” since he was well known to pull together parts from this and that to fix whatever you gave him. “If you gave him something, he’d fix it — and fix it good!”

Arvaluk will also be remembered for fighting long and hard to get a new arena for Pond Inlet, Enook said — an arena that finally opened in 2011.

Enook recalled a famous quote from Arvaluk in reference to the old arena, “He said something like, ‘I don’t like skating and watching the stars through the roof,’ because that was how bad the roofing was,” Enook said.

“The thing that came to mind immediately today is now he is skating with the stars, in a good way. He’s a free spirit. I can see his face smiling and proud to be skating where he is, having accomplished what he wanted to accomplish.” 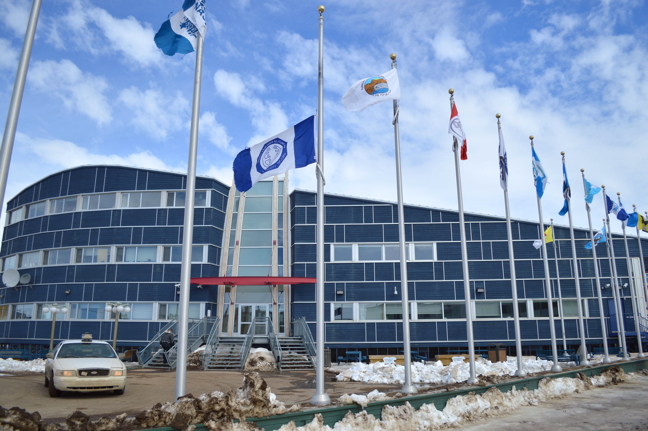 The Pond Inlet flag, which flies at the Nunavut Legislative Assembly in Iqaluit, was set to half-mast April 28 to honour the death of former Nunavut MLA and career politician James Arvaluk. (PHOTO BY STEVE DUCHARME)