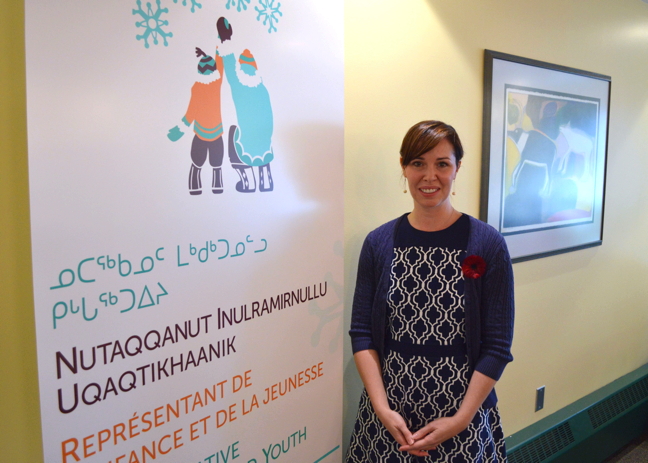 Sherry McNeil-Mulak, Nunavut’s new Representative for Children and Youth, held her first news conference Sept. 28 and said she and staff will work on a mandate as soon as the office opens Sept. 30. (PHOTO BY STEVE DUCHARME)

We work for you.

That’s the message Sherry McNeil-Mulak, the appointed representative for children and youth, wants to broadcast to Nunavut’s young people ahead of opening their headquarters Sept. 30.

“As of Sept. 30, Nunavut’s children, youth and their families will have an organization to go to when they have questions or concerns about child rights and government services,” said McNeil-Mulak during her first press conference at the organization’s new office in downtown Iqaluit Sept. 28.

The Representative for Children and Youth Act, passed by the Nunavut Legislative Assembly in 2013, will take full effect across the territory the same day the office opens to the public.

The organization, granted broad advocacy authority by the Government of Nunavut, will provide children and young people in the territory with information on their rights and will help show them where to go when they need something.

“Our office will also do systemic advocacy, where we delve into bigger issues affecting larger groups of children and youth, looking at policy, programs and legislation,” McNeil-Mulak said.

The opening of the office couldn’t be better timed for Nunavut youth.

Last week, jury members at the coroner’s inquest on suicide recommended the GN declare a state of emergency over the territory’s appalling suicide rate — estimated at 10 times the national average.

“Most of us in this territory have been impacted by suicide in some way, including myself, and that’s a very sad but true statement.”

The representative was not prepared to outline specific strategies on suicide, and many other challenges facing Nunavut youth, until the office has had a chance to consult with the public and compile data — although McNeil-Mulak informed media that the office has already been conducting some preliminary research.

“At this point in time, it would be premature to say where we’ll focus those [resources], but we have a plan in place for what we consider in arriving at that decision and criteria to help guide our selection.”

The representative and staff expect to be working closely with Nunavut’s departments of education, family services, justice and health on “multiple issues,” since they do the most work with the territory’s youth.

The creation of the Representative for Children and Youth office, and its legislative authority, is long overdue and has not been without controversy.

In 2013, MLAs asked to delay the passing of the act, then known as Bill 40, to gather more information about the office’s implementation and mandate.

For McNeil-Mulak at least, she answers first to those whom she will defend.

“You are who we are accountable to. It is an honour for us to represent your voice,” she said to close out her speech.

The Representative for Children and Youth office, located on the third floor of the Qamutiq building in downtown Iqaluit, will open to the public Sept. 30.