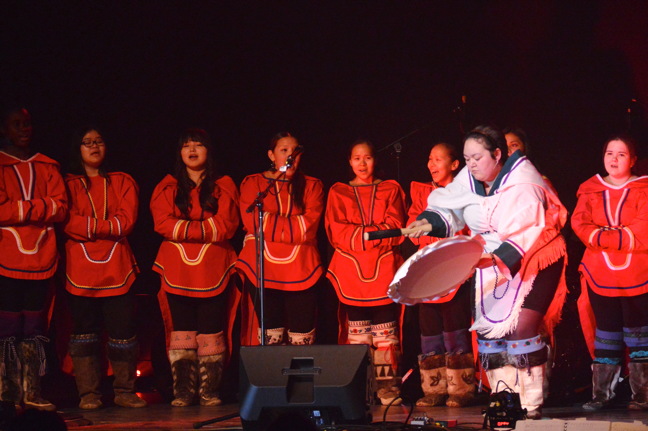 The Inuksuk Drummers and Dancers perform during a National Aboriginal Day concert in Iqaluit June 21. Statistics Canada says that by 2036, the population of Inuit in Canada could grow from the current 63,000 to about 95,000. (PHOTO BY STEVE DUCHARME)

But how big will the population be on the holiday’s 40th anniversary in 2036?

Statistics Canada says Canadians can expect more of the population to identify as Indigenous, according to projections released June 21 to coincide with National Aboriginal Day.

Indigenous numbers could be as high as 6.1 per cent of the entire Canadian population, with estimates anywhere between 1.9 million and 2.6 million people.

That’s up from the roughly 1.5 million people who identified as Indigenous in 2011, making up 4.4 per cent of the population.

StatsCan says the growth in population also means a growing urban Aboriginals population, with more than half of Non-status Indians living in metropolitan areas by 2036.

The report also states that “most” Inuit will still live in the four Inuit regions by 2036.

Inuit will continue to be among the youngest demographic in Canada, but will get a little older. The median age is expected to rise to between 28 and 32 years, up from the median age of 23 estimated in 2011.

That’s still lower than the median age for rest of Canada’s population by 2036, estimated to be between 40 and 44 years.

But as the population grows, territorial and federal governments will need to resolve some harsh inequalities revealed in the 2011 national census, the report notes, notably:

• 30 per cent of Inuit in Canada live in over-crowded homes, compared to 27 per cent for on-reserve First Nations peoples;

• 30 per cent of Inuit live in homes “in need of major repairs;”

• 45 per cent of employed Inuit, aged 25 to 64, do not have a post-secondary certificate, diploma or degree;

• Inuit with a higher education make a median income of $22,800 more than Inuit without post-secondary education; and,

• only 14.5 per cent of the Aboriginal population reported an Aboriginal language as a mother tongue — defined as the first language they learned as a child.