“I didn’t think much of it at first, then I started to see the needles and the huge amount of it” 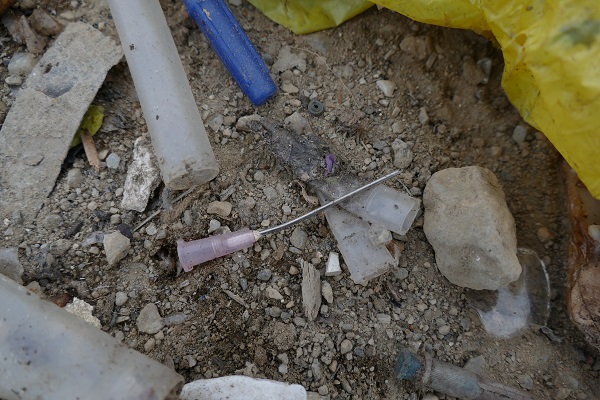 Allen Gordon found used syringes and other medical waste May 25 during a visit to Kuujjuaq’s dump. The site has since been closed to the public. (PHOTO BY ALLEN GORDON)

The Northern Village of Kuujjuaq has closed its dump until further notice while officials investigate how biohazardous waste was openly disposed of at the site.

Dump sites and landfills across the North often double as depots for used goods, where residents can scrounge for re-usable items.

Allen Gordon was on the lookout for usable lumber last Friday, May 25 at Kuujjuaq’s dump, when a pile of trash caught his attention.

“I didn’t think much of it at first, then I started to see the needles and the huge amount of it,” he said.

Along with needles, Gordon spotted vials, used rubber gloves and other medical waste.

Knowing that other residents rummage through the site, Gordon reported the discovery to the municipality, which quickly moved to close the site to the public.

Gordon said he was shocked by the “carelessness” of whoever dumped the material there, given the potential for transmission of infectious diseases.

In a comment provided to Nunatsiaq News, the Nunavik Regional Board of Health and Social Services said it’s aware of the recently discovered material and is taking part in the investigation.

The health board did not respond to a request for information on its waste disposal policies, but said “the process of disposal and methods used is under review and the appropriate parties are working together to understand exactly how this situation came to be.”

Kuujjuaq residents who have any information about the source of the waste or other related concerns can contact bylaw enforcement at the Northern Village office at 819-964-2943 x 226.