“We want to provide service in all the communities” 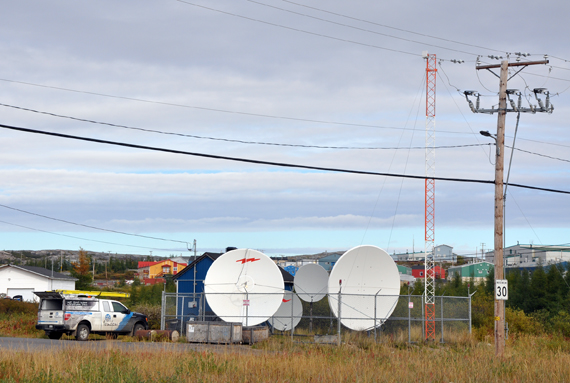 A Tamaani technician checks out some of the service providers’ equipment in Kuujjuaq. As part of Tamaani’s region-wide upgrades, Nunavik’s cellular provider will have the means to upgrade to 4G technology beginning in 2016. (FILE PHOTO)

Nunavimmiut can expect big changes to cellular service across the region in the upcoming year, but service may get worse before it gets better.

Makivik Corp.’s subsidiary Nunacell, which delivers cell phone service to four Nunavik communities in partnership with Lynx Mobility, announced last week that their agreement would come to an end Dec. 31.

But while Makivik’s agreement with Lynx Mobility was set to expire in June 2016, the birthright corporation announced Oct. 30 that the two organizations have decided to terminate the relationship at the end of 2015.

That means service will be cut to both Inukjuak and Puvirnituq for an “indefinite period” while Nunacell looks at other options. Salluit hasn’t had cellular service since a 2014 storm knocked out its local network.

“For sure, we’d like to have a new agreement in place before Dec. 31,” Gordon said.

“And we want to provide cell service in all the communities — that’s our goal,” he said. “We also want to look at [providing] data. The trend is for data, which means using smartphones to go online.”

In September, the Kativik Regional Government said it was in discussion with Makivik about a potential agreement to share communications infrastructure, while its internet service provider, Tamaani, looks to overhaul its network in 2016.

The KRG received $26 million from both the provincial and federal governments this past July to help extend broadband service in the region’s 14 communities until 2021.

It’s that upgrade that will set the basic groundwork for a move up to 4G technology — should Nunacell decide to go that route.

In replacing distribution networks around the region, Tamaani will be installing what’s called High Speed Packet Access, or HSPA+, a technology used by mobile phone service providers that can deliver data transmission speeds up to 42 megabits per second.

But Tamaani has no plans to take over Nunacell or offer its own cell phone service to the region.

For its part, Makivik has studied the option of upgrading its own network to GSM technology, but Gordon said the estimates were cost-prohibitive and limited to cellular service only.

Nunacell currently has about 1,200 subscribers, roughly half of them based in Kuujjuaq.

“There’s been a drop in the number of customers over the past few years, as people go to wi-fi connection instead,” Gordon said. “That’s what led to the review.”

In light of the upcoming changes to Nunavik’s network, Makivik is suggesting that customers may want to hold off on the purchase of a new cellular phone until the new technology in implemented.

“We should know by December, if everything goes well,” Gordon said. “And it looks good.”

At the same time, Lynx Mobility has also announced the termination of cellular service in three Nunavut communities as of Dec. 31: Sanikiluaq, Cape Dorset and Gjoa Haven.

It’s not yet clear if any other service providers plan to renew service in those communities for 2016.