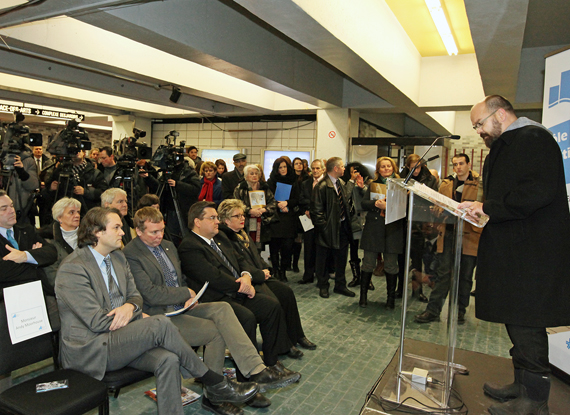 Makivik Corp.’s Robbie Watt, on the right, speaks at a Dec. 16 press conference at Montreal’s Place-des-Arts metro station. Makivik, along with the provincial government and other organizations, announced they will expand a project that puts outreach workers into metro stations in the city’s urban core to provide support to homeless people. Inuit make up about half of the homeless Aboriginal population in Montreal. (PHOTO BY BOB MESHER/MAKIVIK)

The Makivik Corp. has pledged its continuing support to a project aimed at helping the growing number of homeless Inuit living in Montreal.

Along with Makivik, a number of organizations, including Montreal’s public transit corporation, the Quebec government and a handful of other community organizations, will expand a project to reach out to the itinerant population in the city’s urban core.

In 2012, a Montreal social development agency launched its first “service point” at Place-des-Arts metro station, an area frequented by homeless people who use the nearby St. Michael’s Mission drop-in centre.

With the help of Makivik and other organizations, the agency put an outreach worker at the station to provide support and offer referrals to the local homeless population — an estimated 35 per cent of whom are Inuit.

On Dec. 16, the Société de développement social de Ville-Marie announced it will expand that project and now employ three outreach workers to oversee five metro stations in the city.

The expansion will also tailor support to Montreal’s homeless Inuit, a group that comprises about half of the city’s homeless Aboriginal population. The vast majority of those Inuit come from Nunavik; a smaller group comes from the Baffin region.

While there are many factors that drive Inuit south, Watt said historical traumas and a housing shortage in the North are largely pushing Inuit out onto the streets.

“Homelessness can either become a norm in our society, or we can ensure it does not become a continuing problem by adequate housing, income, social services and medical care,” Watt said to an audience that included Montreal mayor Denis Coderre.

“If nothing is done we will experience a continuous rise in Inuit homelessness, which will incur further problems, social burdens, and an enormous financial cost for governments.”

Makivik has already pledged $35,000 to those efforts, money that flows from the Ungaluk Safer Communities fund which underwrites crime-prevention programs and projects for Nunavik.

That’s in addition to other initiatives; Makivik has also funded two Inuit case workers – one male, one female — to work with the city’s homeless.

Those workers are based out of two Montreal drop-in centres; Chez Doris women’s shelter and Projet Autochtones Québec (PAQ.)

PAQ runs the only night shelter in Montreal for Aboriginal people, making it a focal point for many of the city’s homeless Inuit.

Part of the Dec. 16 announcement includes money to run day programs geared towards the shelter’s users.

“We’re really trying to invest this money to give people alternatives, but we also want to give them the means to maintain their culture,” said Robert Beaudry, project director at the Ville-Marie social development agency. “We want to put more of an emphasis on providing services to the Inuit population.”

The shelter, which occasionally holds feasts with seal meat donations, is looking for ways to better access country food.

PAQ is also collaborating with the Montreal Native Friendship Centre for use of its carving room.