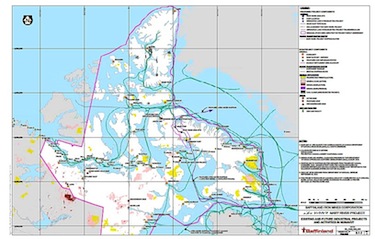 Makivik Corp. is worried about the impact of shipping through the Hudson Strait, as shown here in a map from the final environmental impact statement on Baffinland’s Mary River iron mine project.

Nunavut’s huge Mary River iron mine project may lie more than 1,500 kilometres to the north of Nunavik, but Makivik Corp. says the tankers proposed to ship ore, fuel and supplies through the Hudson Strait will have an impact on Nunavik.

That’s why Makivik has written to the federal minister of Aboriginal Affairs and Northern Development requesting that the Nunavik Inuit Land Claims Agreement Article 7 review process be initiated by the Nunavik Marine Region Impact Review Board.

The goal is to ensure the rights of Nunavik Inuit “are fully taken into consideration by both the current NIRB [Nunavut Impact Review Board] review process and a parallel process conducted by the NMRIRB in respect to the NMR [Nunavik Marine Region].”

Baffinland Iron Mines Corp., a private company now under the control of ArcelorMittal, the European steel-making giant, and a private investment firm, Iron Ore Holdings LP, wants to see the Mary River mine churn out about 18 million tonnes of iron ore a year, which will then be shipped out year-round to markets in Europe and Asia for at least 20 years — and some predict up to 100 years.

The project, now under review by the NIRB, moves into final hearings scheduled for July in Iqaluit, Igloolik and Pond Inlet.

Representatives from Baffinland, Makivik, and the NILCA boards met in Montreal on May 25, with a second meeting between Baffinland, a NMRIRB and the Nunavik Marine Region Planning Commission taking place June 6.

After these meetings and “a careful review” of the final environmental impact statement, Makivik reached the conclusion that “the proximity of the proposed shipping route to the NMR and the high likelihood of deviations into the NMR, as well as the impacts of the dramatic increase in vessel traffic as a result of the project would significantly negatively affect Nunavik Inuit and the resources that they depend on within the Hudson Strait.”

In its final submission to the NIRB, sent June 8, Makivik says Baffinland claims its shipping route falls entirely within the Nunavut Settlement Area.

But Makivik believes that “ice conditions, other climatic conditions, and the pressure imposed by the economic necessity of having the iron ore arrive at market in the quickest possible manner will result in some shipping occurring in Nunavik waters.”

As well, changes in the proposed shipping route to avoid hitting marine mammals or other vessels will result “in further incursions into the NMR” by the iron ore carriers or supply ships, Makivik says.

Makivik says it disagrees with the conclusion of final EIS for the project which states there will “not be any significant effects upon marine mammals.”

Makivik says the final EIS understates the impacts upon wildlife as a result of the “dramatic increase in shipping traffic” in the Hudson Strait
and wants Baffinland to undertake “a more rigorous analysis using updated and more in-depth baseline data of wildlife in the region.”

Makivik is also concerned with the potential for fuel spills or other marine traffic accidents to occur over the lifespan of the project, which it says the final EIS also understates.

Among its nine recommendations to Baffinland: that the company consider an alternate shipping route that avoids areas where concentrations
of marine mammals and other wildlife are known to occur.

Makivik has official intervenor status at next month’s final hearings, so, no matter what becomes of its request to Ottawa for another parallel review of the iron mine project, the organization representing Nunavik Inuit will be able to participate and make its views known.