“We are a tax-based community, but we do not have enough money” 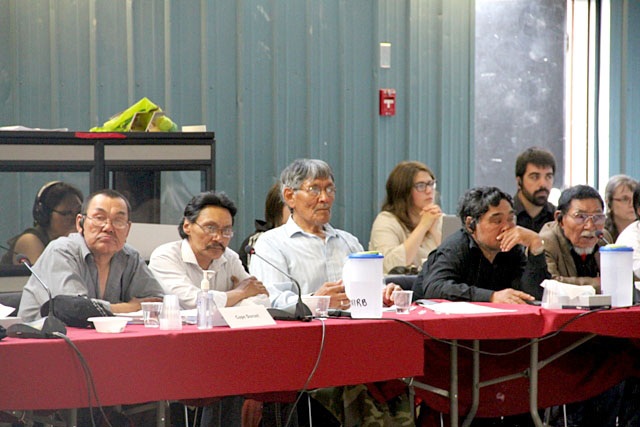 If the Mary River iron mine were to go ahead, the City of Iqaluit would need more money and help from the Government of Nunavut and Nunavut Tunngavik Inc. to cope with an influx for people from other Baffin communities Mayor Madeleine Redfern told NIRB July 20.

“As a result of this project we actually believe there will be additional in-migration from those northern communities,” she said.

The city believes Baffinland and government agencies “should actually work with us in order to project and plan what those potential numbers might be,” Redfern said.

As well, many of those who stay at Iqaluit’s over-flowing shelters for homeless men and women’s arrive from other communities.

“We are not only a point of hire,” Redfern said.

It’s an issue that should be brought to the major stakeholders, she said, especially since Iqaluit is already growing at a rapid rate.

As a regional centre, there are many reasons potential employees of the proposed mine site would move to Iqaluit.

However, some people move to Iqaluit without arranging housing ahead of time.

“This will add more stress and more pressure to those mining employees and their families,” Redfern said, adding, “as a result we often see what happens in overcrowded situations.”

This sometimes leads to more domestic violence, and more social problems, she said.

“When a family moves to Iqaluit and they don’t have housing, and they’ve lived in public housing, when they attempt to move back to the community, they’ve lost their unit,” Redfern said.

A committee addressing some of these social issues would be beneficial, she said.

And Baffinland should be committed to providing some financial literacy training to mining employees and their families, she said.

For Iqaluit, a higher population means more lots to survey, new roads to build and more pipes to lay.

In less than a decade, Iqaluit will actually need a new secondary water source, Redfern said.

Iqaluit struggles to meet growth demands even now, and the Mary River project could mean these demands would be accelerated.

In other communities such as Yellowknife, municipalities received benefits from mining companies that contributed towards infrastructure.

“Too often we are forgotten about,” she said, adding “we are a tax-based community, but we do not have enough money to address these.”

She also pointed out that municipalities get no royalties or tax revenue from mining companies.

Advances on royalties to the Inuit organizations and the Government of Nunavut could help with this, Redfern said.

“We would like it to be recognized that the governments and the Inuit organizations who will receive those [royalties] need to collaborate and work with us so that we will be able to meet and address those needs,” Redfern said.

Iqaluit’s role as as a regional centre ought to be an additional criterion in planning for the mine.

But for the last five years, Iqaluit has not, until now, participated in the process, Redfern said.