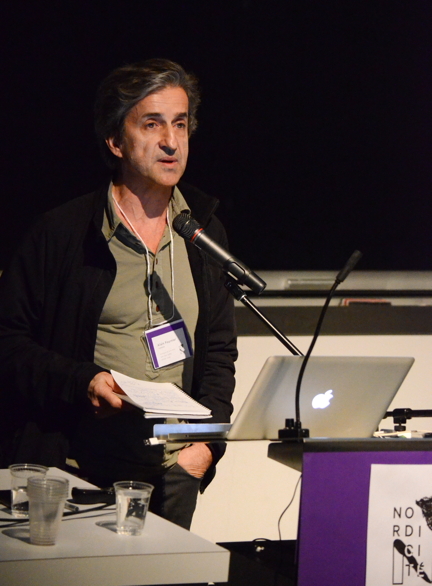 Alain Fournier of the Montreal-based architecture firm Fournier, Gersovitz, Moss, Drolet and Associates, speaks to a crowd of about 100 people at the Nordcité symposium on design and sensibility in a northern context at Montreal’s Concordia University March 12. (PHOTO BY DAVID MURPHY)

MONTREAL — If anyone has the right to lecture about responsible architecture in the North, it’s Alain Fournier.

Reputation firmly established, Fournier began his speech at the Nordcité conference with a warning.

“If my presentation sounds like it’s a bit of an editorial, or a call to arms, well it certainly is,” said Fournier, a partner at the Montreal-based architectural firm FGMDA.

Nordcité, a conference about design and sustainability in a northern context, unfolded March 12 at Montreal’s Concordia University.

Fournier’s presentation, called “Decolonizing Architecture: Towards an Indigenous Architecture,” highlighted how architecture needs to be more than just bells and whistles, especially in a northern context.

Architecture can promote cultural diversity, he said, but those kinds of considerations are often overshadowed by technical aspects of the building.

And empowering Inuit by promoting culture is more important now than ever, he said.

“Indigenous populations are the fastest growing across Canada,” Fournier told the crowd.

“Their languages and culture are actually rapidly eroding and disappearing after the highly effective cultural genocide machine that was set by our governments.”

Fournier said architects have a responsibility to help “reverse the tides of cultural genocide.”

To do that, firms need to conduct community consultations and incorporate Inuit Qaujimajatuqangit.

And when that happens, buildings turn out looking like a qamutik, as in the case of the Puvirnituq Air Terminal, or a qajaq, like Kuujjuaq’s airport terminal.

“Now from 30 years ago when I really started working — I designed the yellow [Iqaluit airport],” Fournier said.

“If I compare that with Kuujjuaq, the Inuit were not consulted at all. They weren’t even considered.

Sadly, even today, some building projects are just “paying lip service” to Inuit, Fournier said. But times are changing.

That change comes from having a better relationship with Inuit — knowing the history, culture and the people, he said.

And while some developers are reluctant to consult with Inuit, Fournier said he and his colleagues were not, “because we knew them.”

“Once you develop these contacts and get used to talking and working with them, then it’s all easy, and vice-versa, because they are comfortable in asking and telling you what they want.”

Inuit can draw pride from buildings they help to design, Fournier said — buildings that better reflect their own culture and history.

“It’s specifically Inuit, it relates to their culture, so they draw pride from this. Given how fragile their cultures are, and what state they are in, that’s even more important.”

Fournier is particularly proud of his work on the design of the new Kenojuak Cultural Centre in Cape Dorset — which just received $2 million in federal money last month.

Fournier said he first came to Nunavut — then the Northwest Territories — when he was 17, and he fell in love with Inuit art.

“So this is closing the loop for me in a way, to be associated with the design of a very important [building] to the community — both artistically and economically — to have this new print shop that will give them safe surrounds,” Fournier said.

“The current premises are incredible. It’s pretty bad. And it’s amazing to think they have produced world-class art in these conditions. And none of our artists south would have accepted these conditions, really.”

Fournier said if funding comes in fast enough, they hope to break ground this summer on the estimated $10-million Kenojuak centre.