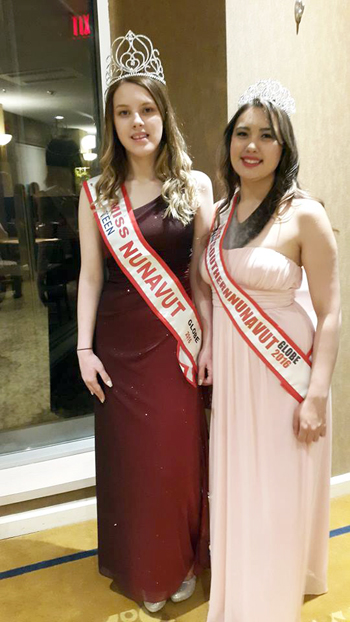 Chantel Caza said she used to be shy and soft-spoken.

But not anymore. The Iqaluit teenager spent 10 days in Toronto this summer, where she was thrown into the limelight along with a group of 33 other young women, all competing to be the next Miss Teen Canada Globe.

“I used to be really shy, until I did this,” Caza said. “And now I’m really comfortable.”

It was a whirlwind trip, with many days only winding down at 3 a.m. But Caza came home with a new outlook and a new title: She is Miss Teen Nunavut 2016.

Caza, who has grown up both in southern Quebec and Iqaluit, decided to register for her first pageant earlier this year, with $6,000 in donations from the Qikiqtaaluk Corp. and other private donors.

This pageant, run through Miss Canada Globe Productions, has been around since 2000, providing young women “with an opportunity to make their mark in today’s society.”

“I decided to do it to boost my confidence, get some experience and meet some new friends,” she said.

Now Caza has a group of friends that spans the country including the one other Nunavut contestant in the teen pageant, Saskia Curley of Rankin Inlet, who placed second in the event and was named Miss Teen Southern Nunavut.

Another Nunavummiut teen contestant competed in a separate category: Talia Maksagak of Cambridge Bay was crowned Miss Petite Nunavut at the same pageant.

The contestants created a chat group on Facebook to keep in touch, Caza said.

With her new title in hand, Caza said she wants to use her new-found confidence to promote that same trait among other Nunavummiut youth.

As part of her 2016-2017 reign as Miss Teen for the territory, Caza must make a number of public appearances and try to recruit new talent to the pageant.

She’s already made her first appearance, when she was introduced to delegates at the Nunavut Trade Show in Iqaluit earlier this month, where she modeled locally-designed clothing.

Caza also plans to work with the Iqaluit Humane Society, the main cause she highlighted as part of her pageant run-up.

“I used to volunteer at the Society for the Prevention of Cruelty to Animals in Quebec,” she said. “I love animals and I decided it would be a good [organization] to promote.”

Now a Grade 9 student at Inuksuk high school, Caza said she plans to go to university to study to become either a veterinarian or a lawyer. 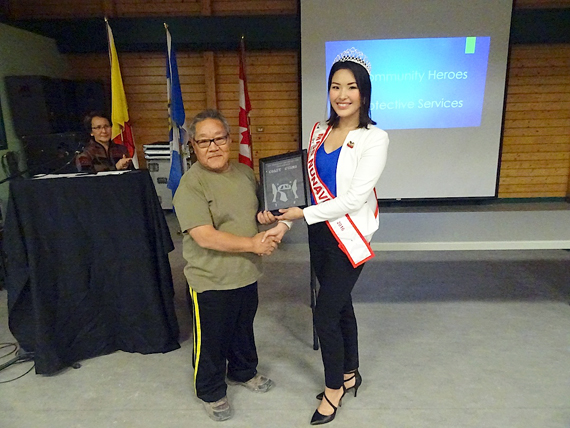 Miss Petite Nunavut Talia Maksagak hands out an award Sept. 28 to the Cambridge Bay Canadian Coast Guard Auxiliary at the community’s celebration of its local “heroes.” (PHOTO BY JANE GEORGE)