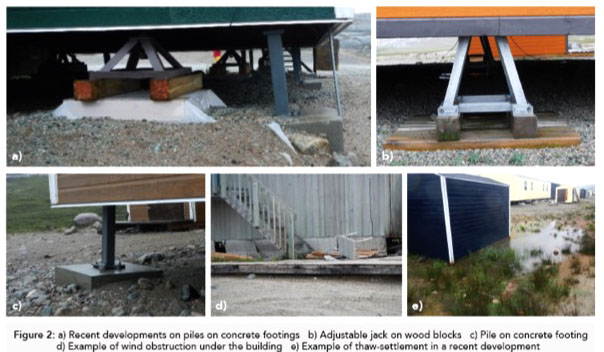 This slide shows techniques that have been used recently in Inukjuak to stabilize buildings that are shifting due to melting permafrost. (COURTESY CATHERINE CLAVEAU FORTIN) 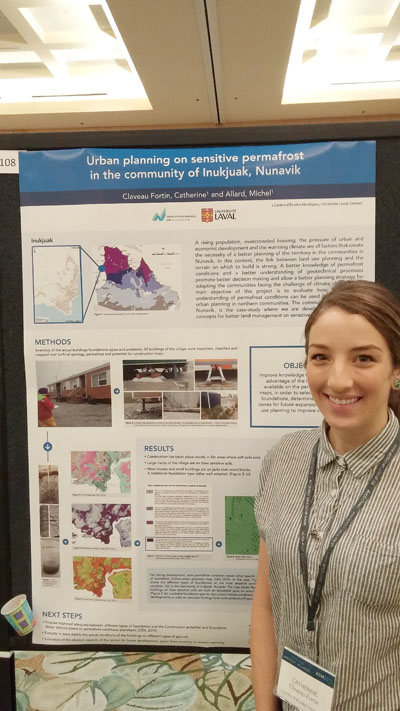 Catherine Claveau Fortin with a poster she prepared for the ArcticNet conference in Vancouver last December. (COURTESY CATHERINE CLAVEAU FORTIN)

MONTREAL — Houses in Inukjuak are not likely to fall down any time soon, but one Université Laval researcher remains concerned about the state of infrastructure in this Nunavik community of about 1,600 people.

Catherine Claveau Fortin studied the effects of permafrost melt in Inukjuak this past summer, how it damages building foundations, and more importantly — where in the community to build next.

Permafrost melt is potentially a big and costly issue in Nunavik and Nunavut alike.

As climate change increases temperatures throughout the Arctic and sub-Arctic, the layer of permanent ice underground — which many buildings are rooted to — is melting at an alarming rate.

“Permafrost is the layer that doesn’t thaw in the summer. But now, because of climate change, it thaws. So that’s the problem,” Fortin said.

In fact, “large tracks of [Inukjuak] are on thaw-sensitive soil,” Fortin described in presentation to the ArcticNet conference this past December in Vancouver.

“I think that some people are already worried about it because they live in the buildings and they see the problems and impacts,” Fortin said.

Buildings on top of unstable permafrost are bending and twisting with the change, something Fortin saw first-hand last summer.

Some buildings need balancing out by adding supports to the existing frame of the building — the same idea as stabilizing an uneven table leg with folded paper.

One building, built in 2006, is already feeling the effects.

“It moved too much, so they had to stabilize the building because, when they crack and everything, it’s not a nice place to stay because it will be cold in winter,” Fortin said.

Fortin is still calculating the exact number of Inukjuak buildings which are impacted by permafrost melt, but she’s intending to return to the community later this year to continue her project.

Her main goal: finding out where it makes sense to plan future developments.

“I’m looking at what they’re doing now and for future development I will make some maps so that they will be tools. I will give it to the community and they will be able to use it if they want to,” Fortin said.

That’s important because, as Fortin mentions in her poster presentation to ArcticNet’s conference, “rising population, overcrowded housing [and] the pressure of urban and economic development,” demands that Inukjuak expand.

The best solution is building homes on bedrock. But building further away from the community isn’t so easy.

“Because sometimes people want to be along the water or maybe sometimes they don’t want to go so far from the centre of the village.

“So there’s a lot of things you have to think about than just say: ‘oh yeah, go build on the bedrock,’” she said.

Allard, who released a paper on Akulivik and Kangiqsualujjaq’s situation last year, is familiar with seeing faults in buildings across Nunavik.

“And people are concerned too. And they fear for the future and that’s quite understandable.”

In fact, there’s been some talk in the past about partial or total relocation of some communities.

But nobody should worry about that right now, Allard said.

“Not at all. I don’t think so. If we talk together in two years from now, maybe I will tell you, with a better analysis,” Allard said.

“I think we might have to think of it in the future. But it’s a very difficult issue. It was discussed in the Salluit project but it’s not just a matter of soil, it’s a matter of the community’s sense of being a community.”

Allard, however, sees this problem as an opportunity for better planning in northern communities.

Many Nunavik communities grew naturally over decades without much urban planning.

So now, if the community were to choose to build on more stable bedrock, there’s an opportunity for smarter planning.

“With land use planning there is an opportunity to increase the quality of life,” Allard said.

“There is now, for real, urban planning. Concentrate, for example, the social activities in one area and recreation in others.”